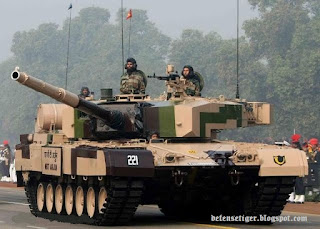 “The Indian Army is planning to design and develop a new generation, state-of-the-art combat vehicle platform for populating its armored fighting vehicle fleet in the coming decade. This vehicle, which will be called the future ready combat vehicle (FRCV), will form the base platform for the main battle tank which is planned to replace the existing T-72 tanks in the Armored Corps,” the RFI reads.

Additionally, the RFI notes that the FRCV “should be in the ‘Medium Tank’ category” and should “match contemporary MBTs in engagement ranges, all weather day/night fighting capability, depth of penetration and variety of ammunition.” The Indian Army wants the new FRCV ready for induction by 2025-27 – a deadline that almost certainly will have to be extended given India’s defense procurement track record.

Consequently, in the meantime, India will do well to continue upgrade its 1900 strong T-72 MBT force. New Delhi has so far failed to successfully mass-produce an indigenously developed modern main battle tank.

The recent RFI could also very well ring the final death-knell for India’s indigenously developed third generation Arjun MK-I main battle tank – a poorly designed vehicle (e.g., too much heavy armor versus too little horsepower) that encountered repeated delays due to a flawed procurement and testing process. Almost eighty percent of the 124-strong Arjun MK-I tank force is currently grounded due to more than 90 technical issues.

India has been working on an improved version of the Arjun, the MK-II, which has done very well in comparative trials with license-built Russian tanks such as the T-90M. It displays more than 93 improvements over the older version and contains 60 percent locally manufactured components. However, a decision to indigenously develop a new anti-tank missile to be fitted onto the MK-II will, in all likelihood, delay the induction of the upgraded platform.
Posted by Unknown at 10:17:00 AM