Launched from ground-based transporter erector launchers, warships and submarines, the Babur can be armed with a conventional or nuclear warhead and has a reported range of 700 km (435 miles). The missile is designed to avoid radar detection and penetrate enemy air defences. Serial production of the Babur started in October 2005.
The Babur's airframe is made up of a tubular fuselage, with a pair of folded wings attached to the middle section and the empennage at the rear along with the propulsion system. Propelled by a jet engine (either turbofan or turbojet), the Babur has a maximum speed of approximately 550 mph. On launch, a booster rocket provides additional thrust to accelerate the missile away from the launch vehicle. After the launch the wings unfold, the booster rocket is jettisoned and the jet engine started.

The missile is stated to have a high degree of maneuverability, allowing it to "hug" the terrain, and "near-stealth" capabilities. Terrain hugging ability helps the missile avoid enemy radar detection by utilizing "terrain masking", giving Babur the capability to penetrate enemy air defence systems undetected and survive until reaching the target. The missile's design features can be compared with the American BGM-109 Tomahawk cruise missile.

More advanced versions of the Babur are under development, later versions are planned to have a range of 1000 km and be capable of being launched from Pakistan Navy submarines such as the Agosta 90B Khalid class
specifications 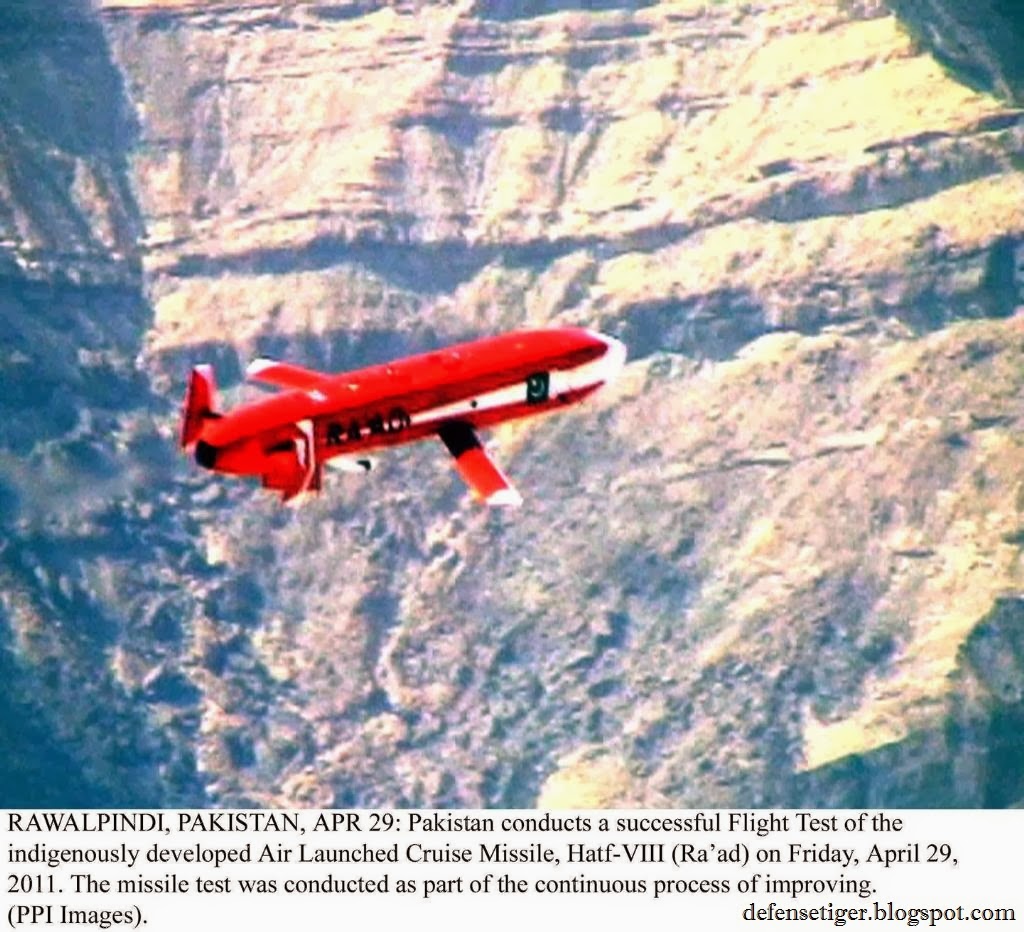 The (English: Thunder) is an air-launched cruise missile (ALCM) developed by Pakistan and operational with the Pakistan Air Force (PAF).


The Ra'ad's current range is stated to be 350 km.
Ra'ad is designed to attack fixed enemy installations (such as radar posts, command nodes and stationary surface to air missile launchers) at stand-off range, keeping the launching aircraft away from enemy air defence systems. The accuracy of the missile is reported to be comparable to Pakistan's Babur cruise missile, which has "pinpoint accuracy" according to official sources. 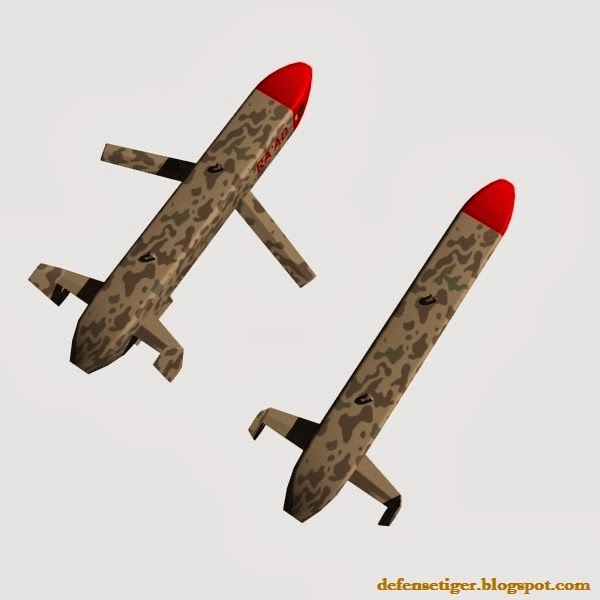 The Ra'ad's airframe is designed with stealth capability, provided by the shape of the airframe and the materials used in its construction, to give the missile a low detection probability and allow it to penetrate enemy air defence systems. Designed to carry conventional or nuclear warheads, the missile would most likely be used for precision air strikes on enemy command centres, radars, surface to air missile launchers, ballistic missile launchers and stationary warships.

Specifications
Warhead: Conventional HE or nuclear

Called the Qing-class SSK, it is a variant of the Type 041A Improved Yuan-class SSK, which is also due to begin its sea trials later this month. It is now believed that the contract inked between CSIC and Pakistan early last April calls for the CSIC’s Wuhan-based Wuchang Shipyard to supply six Qing-class SSKs, all of which will be equipped with a Stirling-cycle AIP system and will be able to carry up to three nuclear warhead-carrying CJ-10K LACMs each.

The double-hulled Qing-class SSK, with a submerged displacement close to 3,600 tonnes, bears a close resemblance to the Russian Type 636M SSK, and features hull-retractable foreplanes and hydrodynamically streamlined sail. The first such SSK was launched in Wuhan on September 9 last year, and a total of three such SSKs are on order from China’s PLA Navy as well.

The AIP system for the Qing-class SSK was developed by the 711th Research Institute of CSIC. R & D work began in June 1996, with a 100-strong team of scientists and engineers led by Dr Jin Donghan being involved in developing the Stirling-cycle engine, while another team led Professor Ma Weiming of China’s Naval Engineering University began developing the all-electric AIP system.

The two projects entered the production engineering stage in 2007, with the Shanghai Qiyao Propulsion Technology Ltd, a wholly owned subsidiary of the 711th Institute, becoming the principal industrial entity charged with producing the AIP system. Incidentally, the Qing-class SSK’s all-electric propulsion system is a derivative of a similar system that was developed about a decade ago for the PLA Navy’s six Type 093 Shang-class SSGNs and three Type 094 Jin-class SSBNs.
The submarine-launched CJ-10K LACM has been developed by the China Aerospace Science and Industry Corp’s (CASIC) Hubei-based Ninth Academy (also known as the Sanjiang Aerospace Group, or 066 Base) on cooperation with the Third Academy’s Beijing-based Xinghang Electromechanical Equipment Factory (159 Factory). 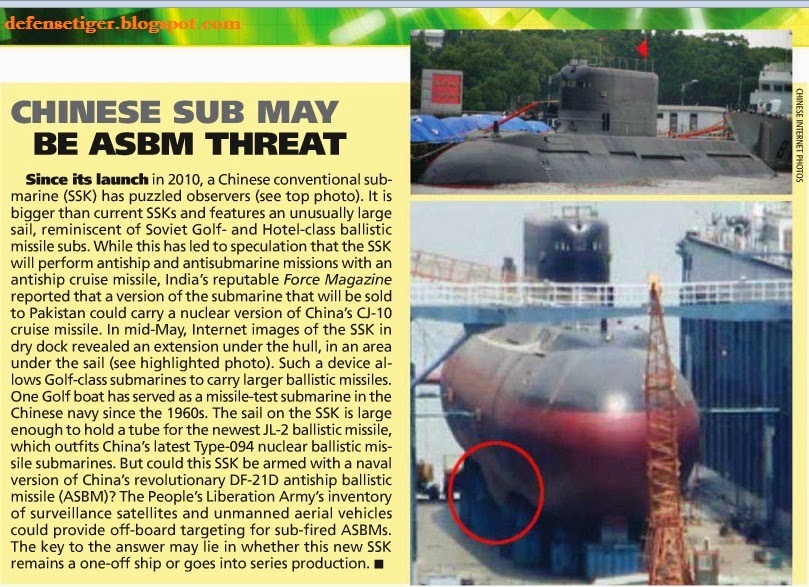 Final assembly of the CJ-10K is undertaken by the Beijing-based Hangxing Machine Building Factory (239 Factory). The CJ-10K features an imaging infra-red optronic system for terminal homing, and it makes use of a ring laser gyro-based inertial navigation system combined with a GPS receiver to receive navigational updates from China’s ‘Beidou’ constellation of GPS navigation satellites.

PLEASE NOTE
This is a rough assumption of pakistan's top 10 future weapons ,if any one has something better list or any weapon which pakistan plans to have which is not in this list then pls post it I would surely edit the list
I hope u would appreciate my hard work.THANK YOU
Posted by Unknown at 2:35:00 PM