B-2 stealth bombers conduct “extended deterrence” round trip mission from the U.S. to S. Korea

B-2 stealth bombers of the U.S. Air Force from Whiteman Air Force Base, Missouri have conducted a long-duration, round trip (training) mission to the Republic of Korea on Mar. 28.
The new “extended deterrence” mission is just the last “show of force” by the United States whose aim was to show its commitment and its capability to defend South Korea and allies in the Asia-Pacific region.
However, unlike previous sorties that were launched by B-52 Stratofortress bombers based at Guam (strategically located 1,800 miles (about 2,900 km) to the east of China), the last mission was conducted by stealth bombers assigned to 509th Bomb Wing that took off from the Continental U.S., flew for more than 6,500 miles to drop inert bombs on the Jik Do Range and returned home in a single, continuos mission like those flown during Allied Force in Serbia or Odyssey Dawn in Libya. 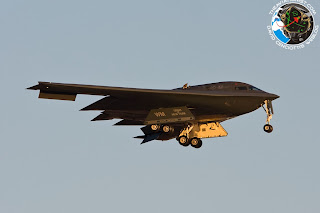 By the way, the B-2 is the only platform capable to deliver the Massive Ordnance Penetrator 30,000lb bomb.

Although the mission was tasked within Ex. Foal Eagle it represents a significant answer to the recent Pyongyang threats. On Mar. 26, 2013 North Korea announced it has ordered artillery and rocket units into “combat posture” to prepare to target US bases in Hawaii, Guam and the US mainland.