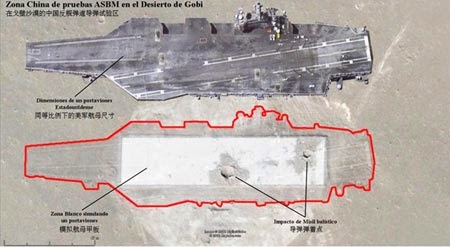 This missile will keep the “dog” out of China’s “backyard.”

According to the January 23 article, “PLA ‘sinks’ US carrier in DF-21D missile test in Gobi,” the “People’s Liberation Army has successfully sunk a US aircraft carrier, according to a satellite photo provided by Google Earth, reports our sister paper Want Daily — though the strike was a war game, the carrier a mock-up platform and the ‘sinking’ occurred on dry land in a remote part of western China.”

“A satellite image reveals two large craters on a 200-meter-long white platform in the Gobi desert used to simulate the flight deck of an aircraft carrier. The photo was first posted on SAORBATS, an internet forum based in Argentina. Military analysts believed the craters would have been created by China’s DF-21D anti-ship missile.”

“While claiming that the missile has the capability to hit aircraft carriers 2,000 kilometers away, the nationalistic Chinese tabloid Global Times stated that the weapon was only designed for self-defense; the DF-21D will never pose a serious threat to US national security because it is not even able to reach Hawaii, the newspaper said, though fully aware of the US naval deployment in the Western Pacific.”

“Underlining this point, Global Times took a common line from China’s national defense doctrine before the country acquired an aircraft carrier of its own — namely that carriers are an offensive weapon while anti-ship missiles are defensive. ‘It can be used like a stick to hit the dog intruding on our backyard, but it can never be used to attack the house where the dog comes from,’ the paper’s commentary said.”
Posted by Unknown at 4:57:00 AM