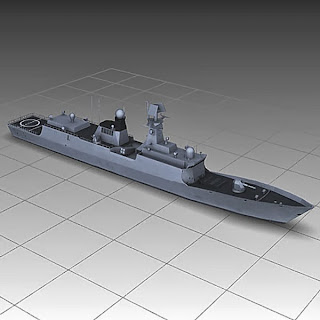 I used the DML/Dragon USS Oliver Hazard Perry class frigate hull as the basis for this model. The hull was extensively modified to create the proper shape, with various parts coming from my spares box.

The Type 054A (NATO codename: Jiangkai-II Class) is the new-generation multirole missile frigate developed from the Type 054 (Jiangkai Class), incorporated with improved weapon systems and sensors. The frigate is being built by the Shanghai-based Hudong-Zhonghua Shipyard and Guangzhou-based Huangpu Shipyard, both part of the China State Shipbuilding Corporation (CSSC).

So far a total of four hulls have been commissioned: Xuzhou (530), Zhoushan (529), Huangshan (570), and Chaohu (568). The first and third hull were built by the Huangpu Shipyard, and the second and fourth by the Hudong-zhonghua Shipyard. The fifth and sixth hulls were identified in the two shipyards in late 2008.
The Type 054A was designed primarily for air defence role, featuring a medium-range air defence missile system with a 32-cell vertical launch system (VLS) on the bow deck. The frigate is also capable of anti-surface strike with its YJ-83 anti-ship missiles.

Like the Type 054, the Type 054A incorporates a number of stealthy features in its hull design, including the sloped side to minimise radar cross section and the reduced profiles of external features. The helicopter deck at the stern has a single landing spot for a medium size helicopter, such as the Russian Kamov Ka-28 Helix, or the indigenous Harbin Z-9C. The deck is fitted with the helicopter handling system. The vessel has a full displacement of 4,500 tonnes.

Missiles
The primary surface strike weapon system is the YJ-83 sea-skimming anti-ship cruise missile. Two quadruple launchers are installed at the mid-ship position. The missile uses active radar-homing to deliver a 165kg warhead to a range in excess of 180km.

The principal air defence weapon system is a 32-cell VLS developed by Luoyang Electro-Optics Technology Development Centre (EOTDC). The exact model of the air defence missile is unknown, but some reports have suggested that it may be the 38km-range Russian 9M317 (NATO codename: SA-N-12) Shtil semi-active radar-homing medium-range SAM, or its Chinese copy reportedly designated HongQi-16 (HQ-16). 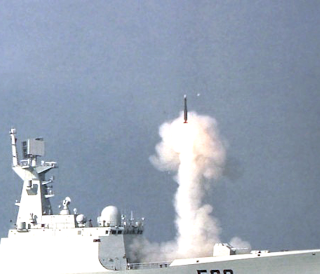 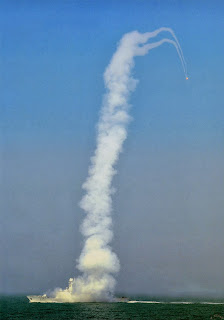 Guns
A single-barrel 76mm gun (possibly Russian AK-176 copy) is installed on the bow deck, in front of the VLS. 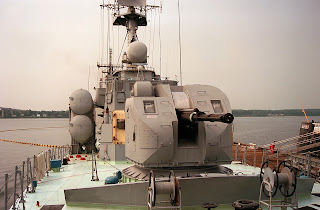 The frigate is equipped with two Chinese indigenous Type 730 seven-barrel 30mm CIWS to provide short-range air defence. The Type 730 CIWS has a maximum rate of fire of 4,600~5,800 rounds/min and a maximum range of 3,000m. The gun is controlled by the Chinese-made TR47C fire-control radar and an electro-optic director, both mounted on the roof of the gun turret. 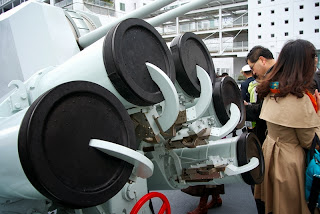 Sensors
The sensors of the Type 054A Jiangkai-II class are mainly Russian designs, produced either by licensed co-production or reverse-engineering of the systems obtained along with the Project 956 Sovremenny class missile destroyers.

The air search radar is a Fregat-MAE-5 (NATO reporting name: Top Plate) 3D air search radar mounted at the top of the front mast, offering two channels in E-band. The radar can track up to 40 targets simultaneously, and has a maximum range of 120km to aircraft and 50km to sea-skimming missile. 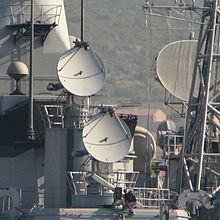 The ship has three indigenous Type 347G I-band radars, two of which are integrated with the Type 730 CIWS to provide fire-control and a standalone radar is installed on top of the bridge behind the large round radome provides fire-control for the 76mm main gun. There is also a large round radome mounted at the top of the rear mast, possibly housing a MR36 (Type 346?) surface search radar.

Countermeasures
The ship is equipped with two 18-tube multiple rocket launchers at the mid-ship position. They are thought to be used to launch decoys/chaffs. The round radome installed on top of the helicopter hanger and few smaller round radomes are believed to house electronic warfare antennas.

Propulsion
The propulsion is a combined diesel and diesel (CODAD) arrangement. The system is based on four SEMT Pielstick (now MAN Diesel SA) 16 PA6V-280 STC diesel engines.
Posted by Unknown at 2:02:00 PM