The AIM-120C missile is the latest AMRAAM variant and is reprogrammable like the AIM-120B. The AIM-120C has smaller control surfaces to fulfill F/A-22's internal carriage requirements also features an improved warhead.

Three new variants of the PL-12 have been unveiled with newer ones in development:

PL-12B: with improved guidance system
PL-12C: with foldable tailfins for internal carriage on 5th-generation fighters
PL-12D: with a belly inlet and ramjet engine for even longer range attacks, similar to the PL-21. 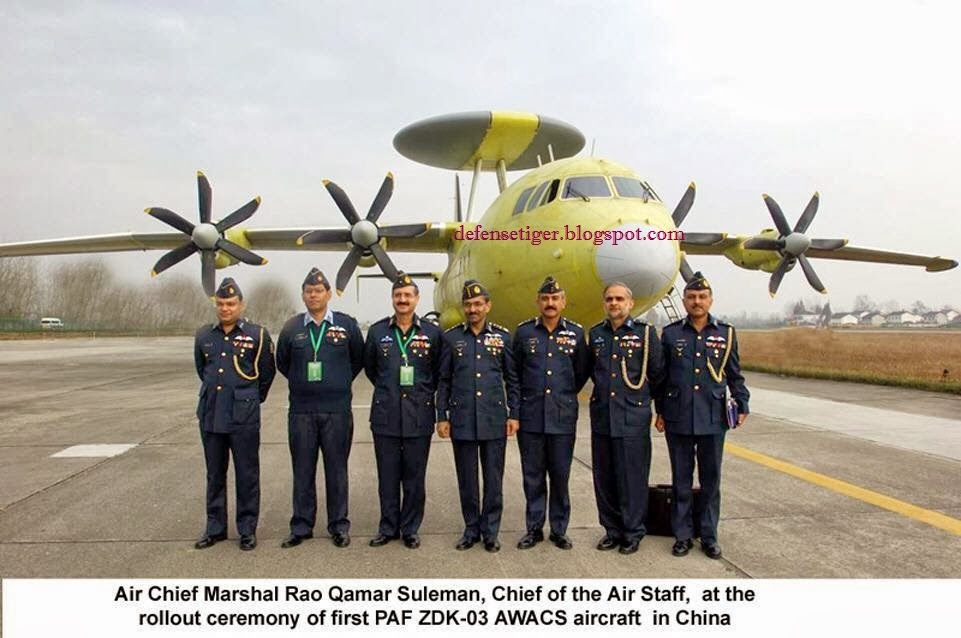 ZDK-03 is an export AWACS system being developed for the Pakistani Air Force. This project was initiated in the early 2000. A Y-8 AWACS testbed (serial # T0518/Project 021) based on Y-8 Category II Platform was first discovered at CFTE in early 2006. Unlike KJ-200, this variant carries a tranditional rotodome above its fuselage, with a mechanically rotating antenna inside. Therefore the Y-8 AWACS was speculated to be developed for the export market only as it appears less advanced than KJ-200 which features a fixed AESA radar.

However this design does provide a true 360° coverage and carry a cheaper price tag. The AEW radar may be the product of the 38th Institute/CETC, but no details are available. The aircraft also features a solid nose with MAWS sensors on both sides, as well as two small vertial tail stablizers. The Y-8 AWACS protoype was promoted to Pakistani AF in 2006. After some negotiations a much improved design was developed based on PAF's specifications. The variant is now dubbed ZDK-03 (ZDK means CETC) and is based on the new Y-8 Category III Platform featuring WJ-6C turboprops with 6-blade propellers.

It was reported in early 2009 that a total of 4 were ordered by PAF in a $278m deal. The first ZDK-03 rolled out in November 2010 at SAC, with the delivery to be scheduled by the end of 2010. A recent picture (July 2011) suggested that the second ZDK-03 has been built. ZDK-03 is expected to serve as the airborne command & control center for the JF-17 fighter fleet currently in service with PAF. However it appears to lack the secure datalink to effectively command western fighter aircraft such as American F-16. Recent images indicated that the T0518 testbed has been further modified to carry a fixed rotodom with three AESA antennas installed inside, which could be a downgraded version of the KJ-2000 AWACS system to be installed onboard the Y-7 carrierborne AWACs.

The Erieye AEW&C mission system radar is an active, phased-array, pulse-Doppler sensor that can feed an onboard operator architecture or downlink data (via an associated datalink subsystem) to a ground-based air defence network. The system employs a large aperture, dual-sided antenna array housed in a dorsal ‘plank’ fairing.

The antenna is fixed, and the beam is electronically scanned, which provides for improved detection and significantly enhanced tracking performance compared with radar-dome antenna systems. Erieye detects and tracks air and sea targets out to the horizon (and beyond due to anomalous propagation)—instrumented range has been measured at 450 km.

Typical detection range against fighter-sized targets is approximately 350 km, in a 150° broadside sector, both sides of the aircraft. Outside these sectors, performance is reduced in forward and aft directions. Other system features include: Adaptive waveform generation (including digital, phase-coded pulse compression), signal processing and target tracking Track While Scan (TWS)Low sidelobe values (throughout the system’ s angular coverage) Low- and medium-pulse repetition frequency operating modes.

Frequency agility Air-to-air and sea surveillance modes. Target radar cross-section display. The radar operates as a medium- to high-PRF pulse-Doppler, solid-state radar, in E/F-band (3 GHz), incorporating 192 two-way transmit/receive modules that combine to produce a pencil beam, steered as required within the operating 150° sector each side of the aircraft (one side at a time). It is understood that Erieye has some ability to detect aircraft in the 30° sectors fore and aft of the aircraft heading, but has no track capability in this sector.

The system provides air defence missile coverage of 2,000km². Target detection and tracking range is up to 60km and the missiles can intercept crossing and approaching targets to a range of 25km. The kill probability is high, even against highly agile crossing targets. The system can engage up to four targets simultaneously with Aspide missiles.

Spada 2000 is modularised and integrated into sheltered units, which provides a high tactical and strategic mobility. The system consists of a detection centre and either two or four firing sections, each section equipped with two missile launchers. Each missile launcher has six ready-to-fire Aspide 2000 missiles.

Configuration Detection centre: 2, 3 or 4 firing sections, each with 2 launchers - 6 ready-to-fire missile per launcher 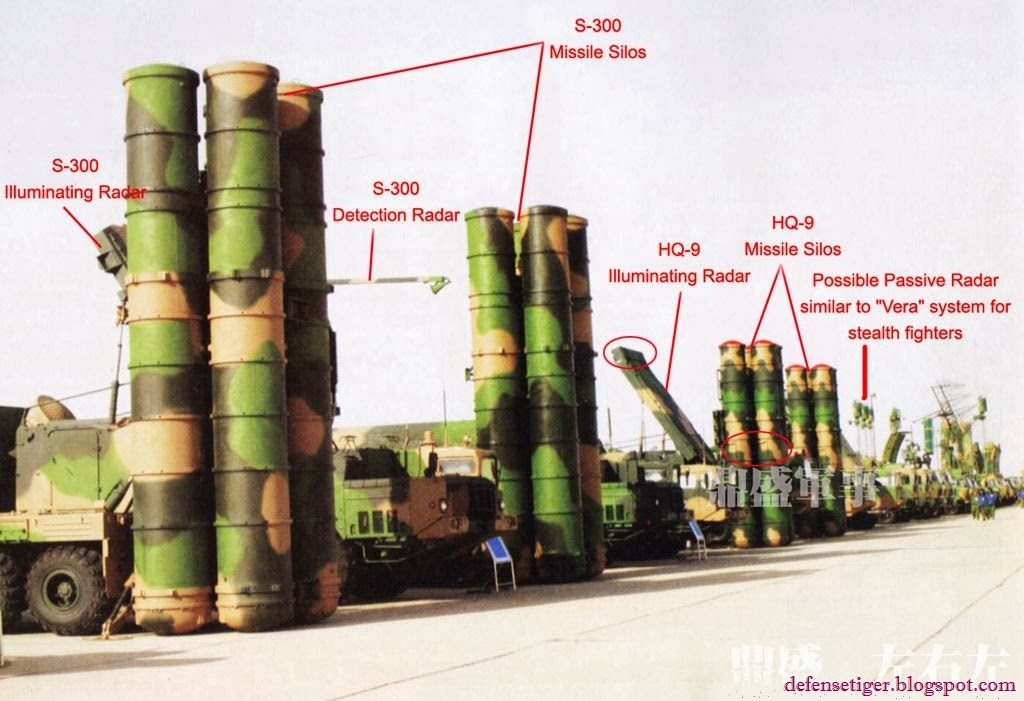 The thrust vector control (TVC) of HQ-9 is the most obvious visual identification that distinguish it from S300V: TVC of HQ-9 is exposed and thus can be observed from the side, while TVC of S300V is not exposed. The HQ-9's guidance system is composed of inertial guidance plus mid-course uplink and active radar terminal guidance systems.

To reduce the cost, the HQ-9 is designed to be flexible enough to employ a wide range of radars, both the search/surveillance/acquisition radar and the tracking/engagement/fire control radar (FCR).

Several search radars are discovered to be associated with HQ-9, including anti-ballistic radars and anti-stealth radars.

After years of watching U.S. drones operate along its Afghan border, Pakistan is working on its own Predator-like unmanned aerial vehicle to undertake the same mission, sources here said. The sources said the country’s air force and government-owned defense conglomerate, the National Engineering and Scientific Commission, are flight-testing a new-design aircraft to be equipped with a NESCom-designed laser designator and laser-guided missiles. The Burraq UAV is named for a winged horse creature in Islamic tradition, similar to Pegasus.

According to local news reports, Pakistan is focusing its unmanned aircraft efforts on upgrading various older UAVs with Chinese help. But the sources note that no domestically produced UAVis large enough to heft both a missile and a targeting system. The military’s most capable UAV is the air force’s Selex Galileo Falco, which can laser-designate targets for other platforms but cannot deliver munitions.

Officials with the Ministry of Defence and Ministry of Defence Production here refused to confirm or deny the program’s existence. A spokesman for the military’s Inter Services Public Relations said it was “not ready to give a statement on the issue at this time.” One former air force officer said the notion of a Pakistan-developed hunter-killer UAV is credible. “You only have to see our track record,” said Kaiser Tufail, a retired air commodore. “We have some fantastic achievements in the field of defense.”

Tufail said Pakistan needs such a weapon. Anti-terror operations on the frontier require “hours and hours of round-the-clock reconnaissance,” married with the ability to strike quickly when a target is spotted, he said. Help from China? Analysts were more dubious about Pakistan’s ability to produce a laser-guided missile, but they noted that help might be found in China or Turkey. Turkey, with whom Pakistan has an agreement to cooperate on UAV development, is seeking an armed UAV, preferably the Predator or MQ-9 Reaper. This UAVmay someday be armed with the UMTAS infrared guided anti-tank missile being developed by the Turkish firm Roketsan to arm the T-129 attack helicopter.

The Burraq is based on the Falco – SELEX GALILEO technology. We produce information on the Selix Galileo so that an adequate comparision can be made with the Burraq.

The F-22P or Zulfiquar Class Frigate , is a general purpose frigate being built by China and Pakistan for the Pakistan Navy (PN).

The F-22P hull uses many of the radar cross-section reduction features of China's Type 054 frigate to help it evade detection by radars mounted on other ships, aircraft and anti-ship missiles.

The FM-90N surface-to-air missile (SAM) system is fitted between the main deck and main gun.

A close-in weapon system (CIWS), the Type 730B, is mounted on the aircraft hangar. Comprising two seven-barrel gatling guns of 30 mm calibre, the F-22P is believed to be the first ship armed with the Type 730B, which uses off-mount sensors such as the Type 347G radar and the OFC-3 electro-optic director.

The Houbei class (Type 022) missile boat is a class in the People's Liberation Army Navy. The first boat was launched in April 2004 by the Qiuxin Shipbuilding Factory at Shanghai. The boats incorporate stealth features and wave-piercing catamaran hulls.

The craft has a single large mask on which a number of unidentified sensors are mounted. A datalink antenna is located between the two missile launch complexes for receiving target information from sea- or air-based sensors, enabling the 'over-the-horizon' strike against surface targets.