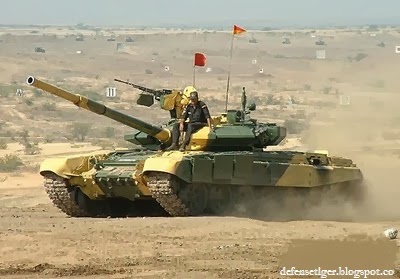 The Al Khalid II is said to have a new armor that has been tested to defeat all known 120 mm and 125 mm rounds. This "special" armor is a major technological breakthrough for Pakistan. The tank has received a new transmission and revised electronic turret control.

The Al Khalid II has a new Integrated Battle Management System (IBMS) and active threat-protection system, the latter being an upgrade from the passive system in the earlier model. The tank is now perhaps the most heavily weaponized per tonnage of any tank, being able to carry 49 125 mm rounds, 1,500 12.7 mm and 7,100 7.62 mm rounds. 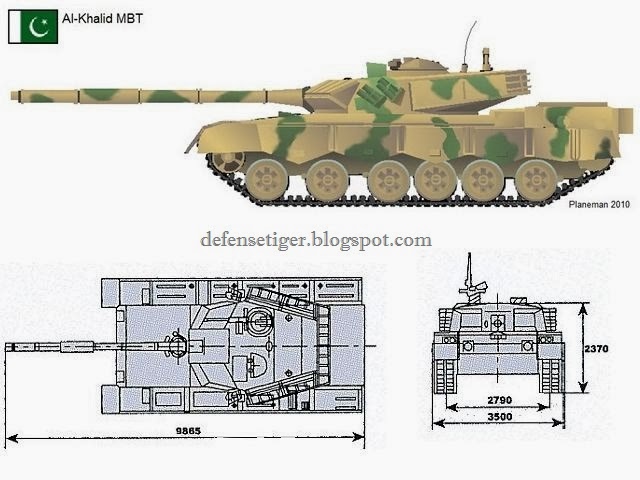 - Further plating in front of the driver's compartment

- New avionics included to allow engagement of low-flying helicopters at extended ranges (Merkava Mk.4 will have a similar feature)

- Enhanced features for crew survivability in case of immobilization

Shaheen III (White Falcon) is an Pakistani intermediate-range ballistic missile speculated to be under-development with a range of 4000-4500 km.

It is a member of the solid-fueled Shaheen series missile family and is envisioned to replace the less advanced liquid-fueled Ghauri III system whose development was canceled in May 2000 according to AQ Khan. The Shaheen series systems are developed by Pakistan's NESCOM and its subsidiary, NDC.

Developed by Pakistan's National Development Complex (NDC), the Hatf IX Nasr has a range of 60 km and is carried by the same Chinese-origin 8x8 high mobility transporter erector launcher (TEL) as the Pakistan Army's AR-1A / A-100E 300mm Multiple Launch Rocket System (MLRS). The TEL platform appears to carry two missiles which are erected before launch and it is believed that the missile range could be extended. 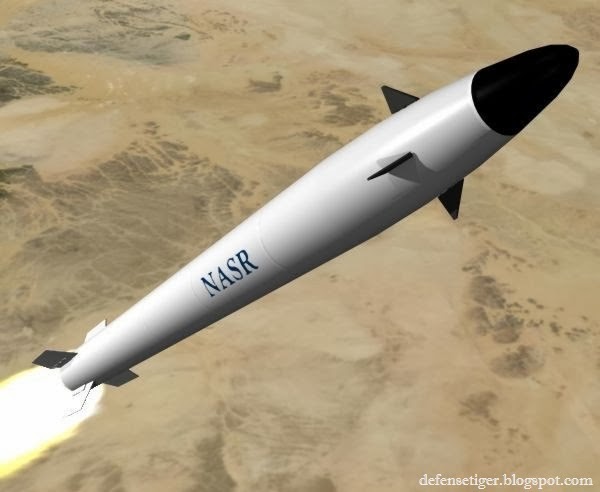 The diameter of the Nasr suggests that it is designed to carry a tactical nuclear warhead weighing less than 1 kg. This would be a boosted fission device using less than 1 kg of weapons grade plutonium, boosted with up to 4-5 grams of tritium. The resulting yield would be in the sub-kiloton range and would be suitable for battlefield use. A sophisticated nuclear trigger mechanism would also be required.

The Hatf IX Nasr seems to prove that Pakistan is capable of building small nuclear warheads for all types of delivery platforms to deter any conventional threats against its sovereignty. 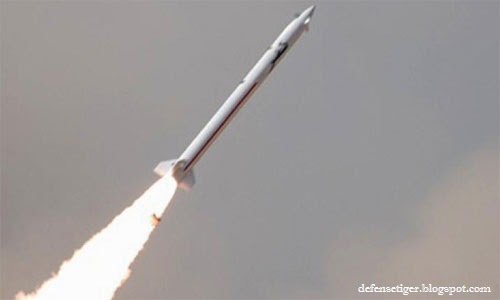 Pakistan and China have recently concluded a final agreement for the manufacture of a second batch of JF-17s. According to well-vetted sources from "Pakdef" (Eagle Hannan), these 50 jets are the final form of the JF-17s. The aircraft will be manufactured at Kamra, Pakistan, but will be flown to China for additional work. This work is said to relate to a new generation of avionics and sensor suite.

The Block II JF-17 is believed to have AESA radars similar to those observed on the J-10B. The integrated avionics, sensors and EW suite is entirely Chinese and is believed to be at the level of Europes best planes. The AESA radar is a slightly smaller version of the one being utilized for the J-10B. The radar is highly sophisticated and its installation is beyond the present capacity at PAC Kamra and will thus require the aircraft to take a trip to Nanjing, China.


The Block II will be the standard version to be used in the PAF with the older Block Is to be retired after the end of production for the first 150 aircraft. This suggests that the structural changes needed to convert the Block Is to Block II standard are significant, suggesting considerable changes to the revised edition. The following are believed to be some of the key changes:

4. The BVR missile is the SD-10B which has been found more than a match for the AMRAAM-120 C5s. An unknown Meteor class missile is in the works beyond the SD-10Bs.

The J-10B is a modified variant of the J-10 multirole fighter aircraft, with modifications in airframe and avionics. Chengdu Aircraft Corporation (CAC) of AVIC began to develop a follow-on variant of its J-10 fighter around 2004/05. A J-10B prototype reportedly made its maiden flight in December 2008. Photos of the aircraft began to emerge on the Chinese Internet in March 2009. Once commissioned, the J-10B is likely going to become the standard for later J-10 productions.

The J-10B features a chin-mounted diffuser supersonic inlet (DSI) air inlet. The traditional rectangle-shape air inlet on the J-10 requires a large moveable inlet ramp to generate a rearward leaning oblique shock wave to aid the inlet compression process. The ramp sits at an acute angle to deflect the intake air stream from the longitudinal direction. The air inlets comprises many moving parts, which increases the aircraft's weight and radar reflections. 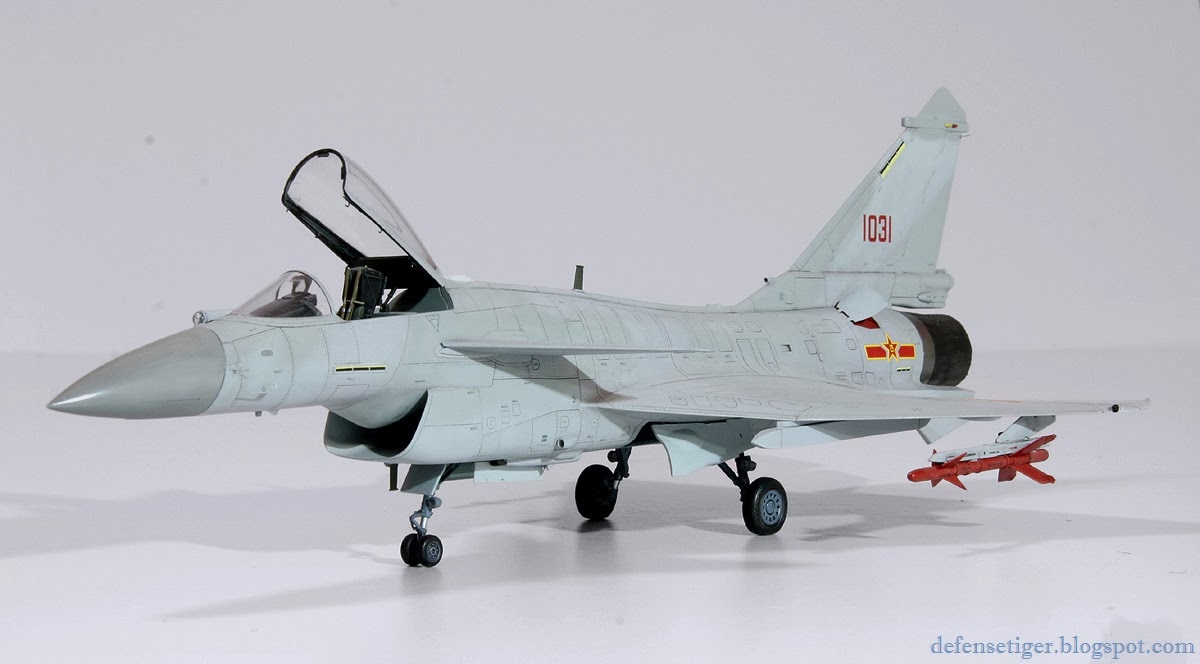 The newly designed rampless inlet, first tested on the FC-1/JF-17 fighter design by Chengdu, employs a one-piece bump at the top of the inlet replacing the movable ramp. This eliminates all moving parts on the inlet, lightening the overall weight and reducing the aircraft's radar signature.

The J-10B has been added with an electronic-optic targeting system (EOTS) commonly found on all fourth-generation Russian fighter aircraft such as Su-27 and MiG-29. Placed forward of the cockpit canopy to the right, the system comprises an infrared search and track (IRST) sensor and a laser rangefinder, which can detect enemy targets passively without requiring to turn on the fire-control radar, thus reducing the chance of the aircraft being detected. The EOTS of the J-10B is likely based on a Russian design. 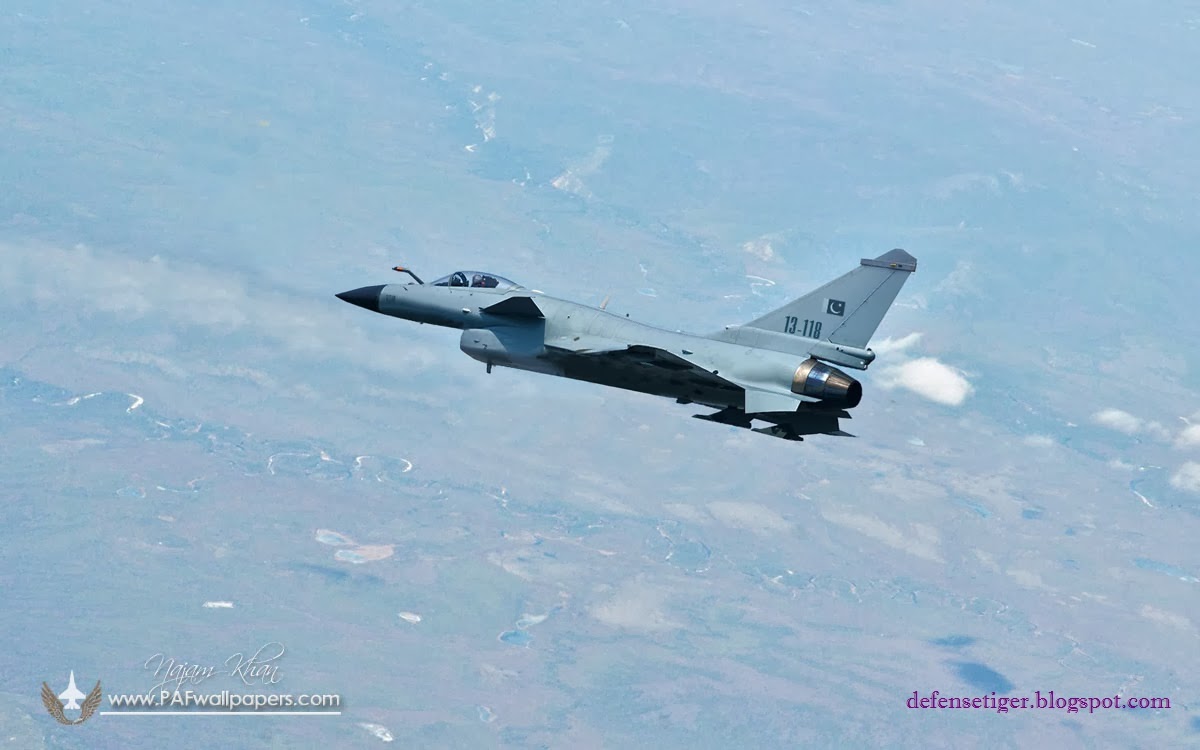 The upper edge of J-10B's tailfin is curved, in contrast to the straight-edged tailfin of the J-10. A large fairing is added to the tip of the tailfin to accommodate electronic warfare and countermeasures (EW/ECM) equipment. 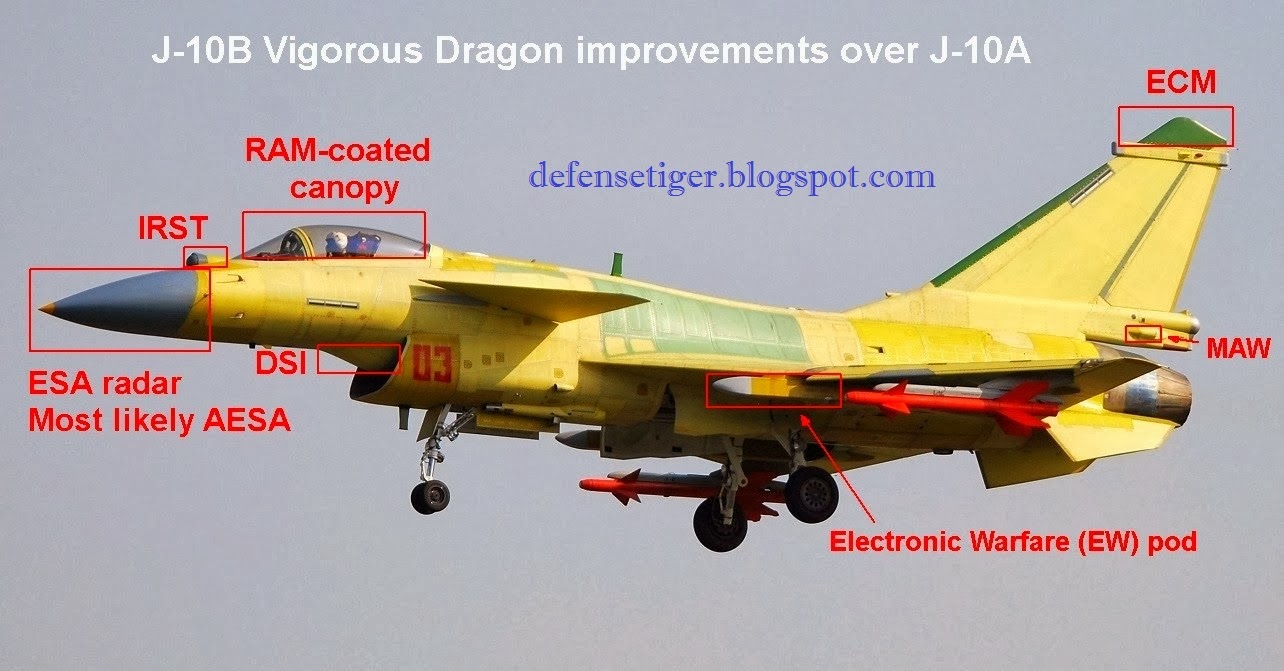