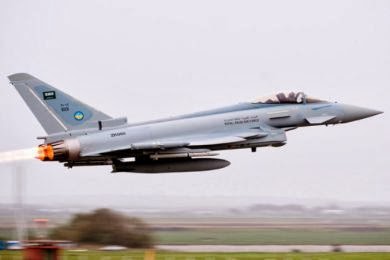 The Roll Out Ceremony for the first two Typhoon aircraft constructed for the c was held at BAE Systems' Warton site yesterday.

This represents another significant stage in the progress of the Salam Project, which covers the supply of 72 Typhoon aircraft tothe Royal Saudi Air Force in accordance with the Understanding Document signed by both Governments.

The Minister for the Armed Forces, Bill Rammell, said:

"This ceremony is a very significant milestone for the Salam Project. The Royal Saudi Air Force is getting a fantastic aircraft. Typhoon is a world-class, multi-role aircraft and will provide the RSAF with the defence capability it needs to meet the defence challenges oftoday and for the foreseeable future.

"The industrial benefits of the Project are also substantial for both nations and will help to sustain several thousand, skilled jobs in the UK and Saudi Arabia over the next ten years."
Background Information

The Governments of Saudi Arabia and the UK signed a formal understanding in 1985 for the supply of Tornado IDS, Tornado ADV, Hawk and PC-9 aircraft, together with associated support services, equipment, weapons, ammunition and electronic warfare systems; the aircraft have all since been delivered.

The two governments signed a Memorandum of Understanding (MOU) in 1986 elaborating the arrangements put in place the previous year. This formalised the role of British Aerospace (BAe) (as it was called at the time) as the main contractorfor the whole programme, and established a UK Ministry of Defence (MOD) Project Office then within the Defence Export Services Organisation (DESO) to coordinate the activities of UK MOD in support of the programme, and to monitor the contracted activities of BAe. The two governments signed the "New Buy Tornado Agreement"for the supply of additional Tornado IDS aircraft in 1993.

On 21 December 2005 the then Secretary of State for Defence, Dr John Reid, signed an Understanding Document which was intended to establish a greater partnership in modernising the Saudi Arabian Armed Forces and develop close service-to-service contacts, especially through joint training and exercises. Under the terms of the document it was agreed that Typhoon aircraft would replace Tornado ADV aircraft and others currently in service withthe Royal Saudi Air Force. BAE Systems would also invest in local Saudi companies, develop an industrial technology plan, and provide suitable training for thousands of Saudi nationals providing through life support for key in-service equipments.
On 17 September 2007, the Governments of Saudi Arabia and the UK announced that agreement had been reached on the sale of 72 Typhoon aircraft. This new defence cooperation programme, which has been designated the Salam Project, will eventually be supported by substantial logistical and training packages. The final details of these support packages are still subject to further discussion between the Governments, but limited aircrew and technician training has already started inthe UK in preparation for the delivery of the first Typhoon aircraft to Saudi Arabia later this summer. The Roll-Out ceremony marks the beginning of the delivery stage of the Salam Project.

Role of UK MOD: The 1986 MOU requires the UK Government to ensure that all equipment, spares, training and technical work supplied by the main contractor (BAE Systems) are in accordance with Saudi requirements. This requirement will continue for the Salam Project. BAE Systems' performance in meeting requirements is monitored by the MoD's Director General Saudi Armed Forces Project (DGSAP) and his staff, based in London andSaudi Arabia.