Land acquisition for submarine base in Cox’s Bazar starts 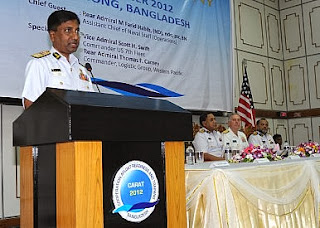 “The state-to-state deal would cost Bangladesh $203.3mn to procure the two Ming-class submarines,” the report said.

Officials from the navy or military’s media arm were not immediately available for comment but the report came four months after Prime Minister Sheikh Hasina announced the government’s plans to procure submarines.

In August, Hasina told a navy ceremony that, despite economic constraints, her government is committed to building a modern and balanced three-dimensional naval force for safeguarding interests in the high seas and littoral regions.


According to earlier reports, the Type 035G diesel-electric submarines were scheduled to be delivered in 2019. The navy decided to make payments to the Chinese state-owned firm that makes the submarines from the current fiscal to 2017-18.

The navy said 17 officials had been trained to operate submarines and it had acquired land on Kutubdia Island in southwestern Cox’s Bazaar to set up a submarine base.

“We need to have a robust maritime presence as a strategic nation,” Maj Gen (retired) A N M Muniruzzaman, a defence analyst, told a news agency.

The Indian Ocean has become the “most strategic maritime theatre” with India, China and the US being the key actors, particularly after America’s maritime policy began focusing on the region, he said.

Analysts have said this deal appeared to be a diplomatic shift as Russia was not a traditional source of weapons. The Bangladeshi military is more familiar with weapons from China and the US, they said.
Posted by Unknown at 5:10:00 PM