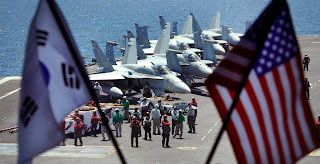 About 20 ships and submarines and the aircraft carrier USS George Washington are participating in joint U.S.-South Korea naval exercises that began Sunday.

North Korea has promised "sacred war" in response to these maneuvers, taking place in the Sea of Japan, east of the Korean peninsula.

That kind of rhetoric is not new — the North used similar language after an international investigation blamed them for the sinking of a South Korean warship this spring. Still, the U.S. military must prepare for the worst.

The man in charge of the U.S. fleet in the Pacific is Adm. Robert Willard. When North Korea threatened war earlier this year, he acted like he'd heard it all before.

"The rhetoric from North Korea is not unusual. We're prepared for any contingency in this region. It's my responsibility that we are," Willard said.

Now, with the latest naval exercises, there is a new standoff. 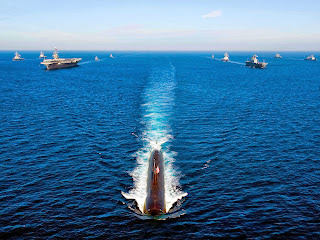 U.S. Navy and South Korean ships sail in a 13-ship formation led by the Los Angeles-class attack submarine USS Tucson on Monday in the East Sea off the Korean peninsula. North Korea has promised "sacred war" in response to the naval exercises, which began on Sunday. U.S Navy via Getty Images
The U.S. military has a number of plans on the shelf, but John Pike, the director of GlobalSecurity.org, explains the two primary scenarios.

One is based on North Korea initiating an attack — the "major theater war plan," or OPLAN 5027. The second situation would be the collapse of North Korea. This second possibility, Pike says, "is no one's initiative — that's something that just happens." It's known as OPLAN 5029.

Michael Green is with the Center for Strategic and International Studies and served on President George W. Bush's National Security Council. He says the U.S. and South Korea would have to respond quickly.

"There would be enormous pressure. In fact, I think the war plans would argue for immediately suppressing the North Korean artillery capability, if they fired at all," Green says.

One risk is that North Korea could launch chemical or biological weapons with that artillery. The North has thousands of guns at the demilitarized zone (DMZ) — many of them in hardened positions such as caves. A few hundred could reach Seoul.

Pike says the Americans and South Koreans have been aware of the artillery threat to Seoul for some time.

"They have counter-battery radars that would detect these guns firing, and counter-battery fire would probably destroy those guns before the first shells that they had fired had hit Seoul," Pike says.

Even so, the first round of fire would still hit the city of 10 million people, possibly killing thousands.

Responses To The First Scenario

Destroying North Korea's artillery would be a U.S. Air Force and Navy fight. Precision-guided munitions would fall from warplanes. Warships stationed nearby would launch guided missiles.

Michael O'Hanlon, a military expert at the Brookings Institution, says responding to a North Korean attack with artillery may not be adequate.

And if it's not, then OPLAN 5027 offers options for what comes next.

O'Hanlon says one possibility in this scenario is taking the fight on the ground into North Korea.

"Do we move in and secure at least a certain swath of land north of the DMZ to push back the artillery more systematically, or do we actually make a quick strike for Pyongyang and try to get the North Korean leadership?" he asks.

Should it come to that, the U.S. would still be in command. But South Korea's army would likely take the lead, driving north across the DMZ, moving into the cities and trying to secure the surrender of individual North Korean commanders.

Despite the planning, most experts agree that the war scenario is unlikely.

Another plan exists for the second scenario, called OPLAN 5029 — regime collapse.
Pike, with GlobalSecurity.org, says this is the plan that the South Koreans have increasingly focused on.

"Over time, South Korea has concluded that an invasion from North Korea is improbable, but a collapse of North Korea may be inevitable. And then the question becomes: What do you do when North Korea falls apart?" Pike says.

O'Hanlon adds that a collapse scenario is "very complicated."

He and others note that in addition to everything planners must anticipate in the first scenario — the barrage on Seoul, for example, or how China would react — a North Korean collapse poses other challenges. That includes securing the nuclear weapons the North is believed to possess, says O'Hanlon.

"I tend to think that one of the most important priorities is going to be to establish, essentially, a cordon sanitaire around the country's perimeter, because you can't risk the nuclear weapons getting out," he says. "And what if some North Korean commander decides that he'll do a deal with al-Qaida?"

O'Hanlon admits that situation is unlikely, but he says reality can be unanticipated.

"We also have to acknowledge that the scenario can surprise us all. We don't get to choose the scenario. The enemy gets a vote, so to speak," O'Hanlon says.

Even 60 years after the Korean War began, some things still can't be planned for.