The Turkish police have ordered six domestically-developed drones and four ground control stations set to be delivered beginning in 2016, sources from the Undersecretariat for Defence Industries have stated.
The Turkish police submitted orders for two systems, which included six unmanned aerial vehicles (UAV) and four ground control systems, to be developed domestically through a joint venture of Turkish companies Baykar and Kale Kalıp.
The undersecretariat initiated talks to acquire locally-made drones in August 2015 in order to meet the “urgent necessities” of the police department.
According to reports, the first agreement for the Bayraktar TB2 Tactical UAVs was signed with the Kale-Baykar joint venture on Oct. 15.
The Bayraktar TB2 successfully completed acceptance tests conducted at a military airport of the 4th Mechanized Infantry Brigade in Turkey’s northwestern Keşan district in November 2014, qualifying to join the inventory of the Turkish Armed Forces.
The UAVs will be able to surveil, perform reconnaissance flights during both daylight and at night and perform fixed or moving target acquisition. The deliveries of “completely national and unique” UAVs are set to start in October 2016.
Bayraktars are able to perform semi-automatic control and automatic taxi, take-off, cruise, landing and parking. They can fly for 30 hours with a 22,000-foot cruising height and can carry a payload of up to 55 kg.
Meanwhile, Turkish police will also acquire 16 explosive ordnance disposal robots from Turkish defense producer Aselsan, alongside 16 mid-size bomb disposal robots. 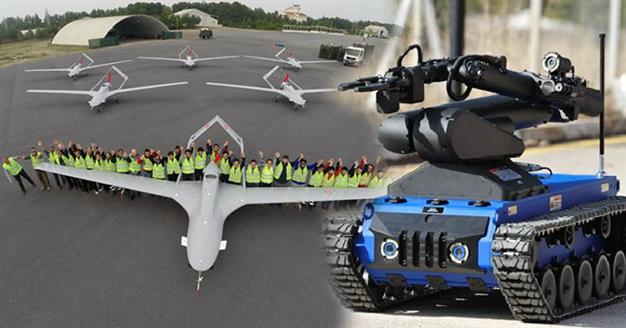