Pakistan had about 120 atomic weapons, 10 more than India, in its nuclear arsenal in 2014, according to a new interactive infographic unveiled by the Bulletin of the Atomic Scientists. 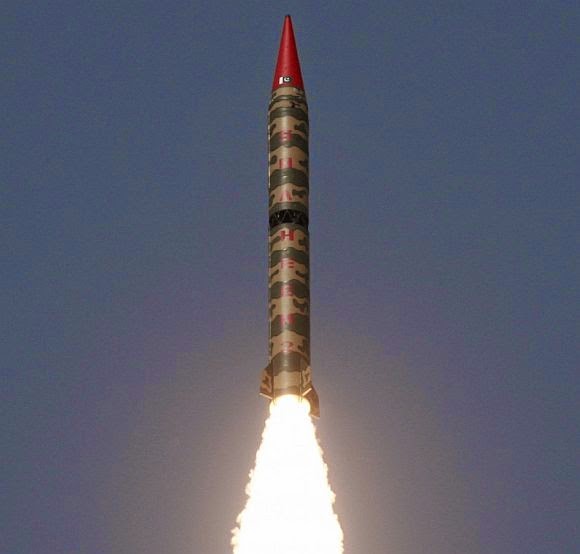 The Nuclear Notebook Interactive Infographic provides a visual representation of the Bulletin's famed Nuclear Notebook, which since 1987 has tracked the number and type of the world's nuclear arsenals.

Having reached a peak of over 65,000 in the late 1980s, the number of nuclear warheads has dropped significantly to a little over 10,000, but more countries now possess them, it shows.

According to the infographic, the United States and Russia both have about 5,000 weapons each.

"I don't think people truly understand just how many of these weapons there are in the world," said Rachel Bronson, executive director of the Bulletin.

"The Interactive is a way to see, immediately, who has nuclear weapons and when they got them, and how those numbers relate to each other. It is a startling experience, looking at those comparisons."

The authors of the Nuclear Notebook are Hans M Kristensen and Robert S Norris, both with the Federation of American Scientists.

Over 28 years of weapons analysis, the Nuclear Notebook column has revealed surprise nuclear activity and spot-on arsenal estimates while becoming a daily resource for scholars, activists and journalists.

"We wanted a way to communicate those numbers visually, because the world we live may be data-driven, it's also visual," said John Mecklin, editor of the Bulletin.

"The new infographic makes this vital information even more accessible."
http://ibnlive.in.com/news/pakistan-has-more-nukes-than-india-shows-new-infographic/533058-56.html
Posted by Unknown at 6:00:00 PM