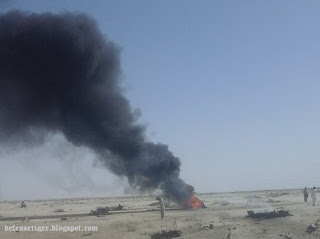 Crash site of Iran Army's F-4 Phantom II near Chahbahar
Pilot & Co-pilot died when a military jet crashed Chahbahar, a south-eastern Iranian port-city while on a training mission, local media reported. The jet crashed was an F-4 Phantom II of IRIAF bought by Tehran from the US before the 1979 Islamic Revolution. 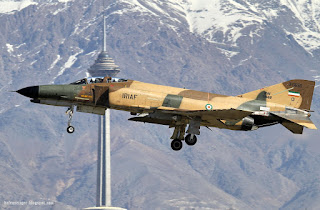 IRIAF F-4 Phantom II
The fighter jet, was on a training mission, crashed near the western border of Pakistan's Balochistan. On Tuesday Tasnim News, an Iranian news agency,  reported the news from Ali Asghar Mirshekari, the security and political deputy to the governor general of Sistan and Baluchestan (Iran) Province. “Unfortunately a military training aircraft crashed today due to technical problems,” Mirshekari also told state TV. The pilot and co-pilot both died in the crash, he said. Mirshekari added the jet belonged to the Iranian Army, while the cause of the crash is under investigation.

Fars news agency reported that a fighter jet had gone down near the port city of Konarak, in Sistan and Balouchestan province. Fars cited local sources who witnessed the crash. They also said that both men in the jet had died. Other reports suggested the plane went down outside the town of Chabahar, which like Konarak is situated on the coast of Chabahar Bay, but on the opposite side.