Royal Air Force used Brimstone missiles for the first time in Syria to strike against Daesh. Four attck was carried out by RAF combat jets deployed in the Middle East to fight against Daesh/ISIS/ISIL. Two of the strikes near Raqqa, targeted a vehicle and in the Omar oilfield in the eastern Syria, media reports. Two Tornado jets used a Brimstone missile to destroy a supply truck near Raqqa, and Paveway IV laser-guided bombs to target two IS buildings, including a command and control center. Another two Tornados and a Reaper drone used three Brimstones, as well as Hellfire missiles, to attack a number of mobile cranes brought in by IS to the Omar oilfield to try to repair damage inflicted by previous air strikes. 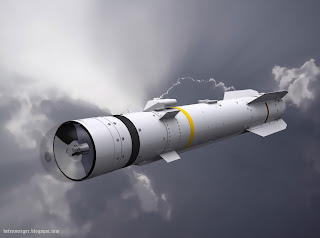 An MBDA Brimstone II missile
Brimstone missiles are radar-guided and can be used against moving targets. The RAF has carried out several strikes in Syria since MPs voted in favour of extending UK action into the country on 2 December. The UK and Saudi Arabia are the only two countries to have purchased Brimstones.
Posted by Unknown at 5:35:00 PM