According to the Middlebury Institute's James Martin Center for Nonproliferation Studies (CNS), the North used “heavy video editing” to cover up the fact that the "rocket ejected, began to light, and then failed catastrophically." On Friday, North Korean state television broadcasted footage of the December SLBM test, which was unannounced beforehand unlike a previous test in May. 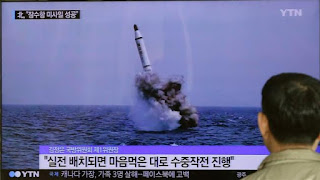 A South Korean man at Seoul Railway Station watches a TV news program showing an image published in North Korea's Rodong Sinmun newspaper of the country's ballistic missile test in May 2015. (AP)
Based on the analysis of the California-based think tank, two frames from the footage show the missile actually catching fire with small components breaking away. "They used different camera angles and editing to make it appear that the launch was several continuous launches, but played side by side you can see that it is the same event,” said a senior CNS research associate, Melissa Hanham, on Tuesday.

The analysis shows that Pyongyang used rudimentary editing techniques to splice the footage with and earlier SLBM test and a Scud missile test. On Saturday, South Korea also announced that the footage appeared to be edited with a SCUD launch from 2014. The footage was released just two days after North Korea announced the successful testing of its first hydrogen bomb, an action that was also met by skepticism and widespread condemnation. Pyongyang is under UN sanctions over launching missiles considered by the US and South Korea as ballistic and aimed at delivering nuclear warheads.
Posted by Unknown at 5:05:00 PM