The Israeli regime has received of a fifth submarine from Germany, amid pressure on Berlin to halt the delivery of the state-of-the-art weaponry that is capable of being armed with nuclear warheads. Israeli Prime Minister Benjamin Netanyahu on Tuesday welcomed the delivery of the advanced Dolphin-class submarine at the Haifa port north of the occupied Palestinian territories. The submarine, said to be capable of remaining submerged for up to seven days, can be equipped with missiles armed with nuclear warheads. 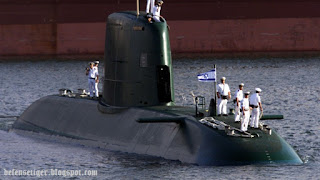 A German-made Dolphin-class submarine arrives at the military port north of the occupied Palestinian territories on January 12, 2016.

The Tel Aviv regime pursues a 'policy of ambiguity' over its nuclear arsenal, which is widely believed to contain up to 400 nukes. The new submarine has cost Israel about 500 million euros (USD 540 million), with the German government paying one third of the cost. Berlin is also to deliver a sixth submarine in two or three years. Many have criticized Germany for the sales of the modern military equipment to Israel. The administration of German Chancellor Angela Markel claims Germany has an obligation to guarantee the security of Israel.

German media say the delivery of the four previous Dolphin-class submarines have cost German taxpayers over 1 billion euros (USD 1.12 billion). Israel’s ministry of military affairs announced in May 2015 that it had reached a deal with a German shipbuilding company to have four major warships built for the Tel Aviv regime. It said the government in Berlin would pay for one fourth of the deal, which was reported to be more than 400 million euros.
Posted by Unknown at 6:49:00 PM