The X-band multifunction radar (MFR) testbed being developed by Ankara-based systems and sensor house Aselsan for Turkey's future TF-2000 air-defence frigate programme will achieve a key milestone in the coming months with the completion of its critical design review (CDR).

The CAFRAD (Çok Amaçli Faz Dizinli Radar) demonstrator is being built under a contract awarded by the Turkish Ministry of Defence's Undersecretariat for Defence Industries (Savunma Sanayii Müstesarligi - SSM) in May 2013.

Speaking to IHS Jane's at the IDEF exhibition in Istanbul on 5 May, an Aselsan spokesperson said the demonstrator, a scaled prototype that will serve to de-risk and demonstrate MFR technologies for the future TF-2000 air-defence frigate, began its CDR phase in September 2014 and this would complete in August. 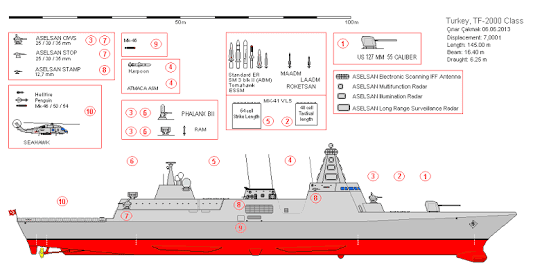