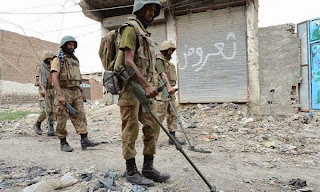 Soldiers searching for IEDs and Roadside Bombs
The attack was successfully repulsed. Some of the injured security personnel are said to be in critical condition. The information could not be independently verified as journalists have restricted access in the Federally Administered Tribal Areas (Fata). Tuesday's clash comes as the army is engaged in an offensive against local and foreign militants in the northwestern tribal regions of North Waziristan and Khyber.