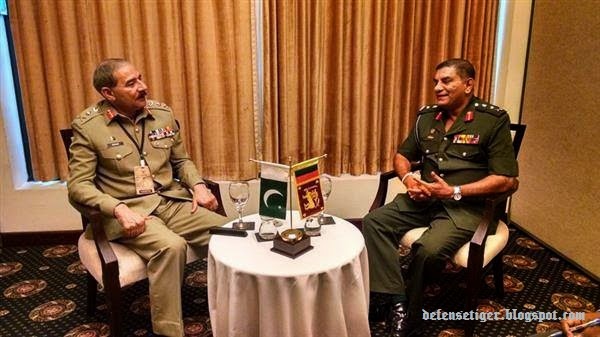 CJCSC with general jagath jayasuria, chief of defence staff, sri lanka during the sidelines of SASEAN.
Rawalpindi - November 29, 2014: General Rashad Mahmood, Chairman Joint Chiefs of Staff Committee (CJCSC), is visiting Sri Lanka to participate in SASEAN (South Asian and Southeast Asian Nations) Defence Chief’s Dialogue. While speaking at the forum, CJCSC highlighted the role played by Pakistan to achieve peace and stability in the region through a perennial resolve against terrorism in its all manifestations. He also dilated upon the functioning of Higher Defence Organization in Pakistan and the synergetic effects of strategic thinking at the highest fora.

The SASEAN forum is a conclave of Defence Chiefs of 18 regional countries which also constitutes SAARC and ASEAN. This being the first session is significant due to its regional peace, stability and confidence building goal setting agenda, and the coming into prominence of the region due to its natural geographical foray into Indo-Pacific Ocean. Delegates from China and Russia also attended the dialogue as observers.