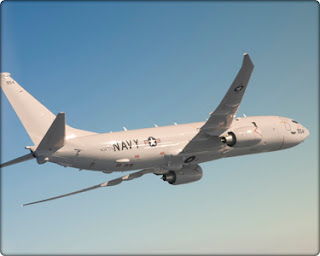 Boeing Maritime Jet Gains Favor in Australia, Paring Drone Need
Australia plans to buy more Boeing Co. (BA:US) P-8 Poseidon maritime patrol jets than initially projected to replace planes dating from the 1970s, reducing its requirement for drones built by Northrop Grumman Corp. (NOC:US)
Funding for the purchase will be sought next year, with talks under way about the exact mix of P-8s and MQ-4C Triton unmanned aircraft, the head of the Royal Australian Air Force, Air Marshal Geoff Brown, said in an interview in London.
Australia currently uses 18 Lockheed Martin Corp. (LMT:US) AP-3C Orions upgraded a decade ago to hunt submarines, monitor ship traffic and aid in rescue missions, with some planes also deployed in combat operations in Iraq and Afghanistan. While it had planned to acquire eight aircraft and seven drones, the number of P-8s could now reach into double figures, Brown said.
“We are making an argument that a larger number of P-8s would be better,” he said. “I am not looking for more dollars, I am just looking at where we spend the money.”
While the P-8 -- a Boeing 737 airliner modified to carry gear that can detect submerged submarines, drop torpedoes and fire weapons -- is more capable than the AP-3C, wider global demands mean a substantial fleet is required, Brown said.
The shift in thinking toward P-8s, currently operated by the U.S. Navy and Indian air force, doesn’t mean drones such as the Triton, a version of the U.S. Air Force’s Global Hawk that’s also used by the U.S. Navy -- are out of favor, he said.
“I’m still a great supporter of unmanned air systems,” Brown said, adding that the Triton, while lacking weapons, would be able to monitor far greater areas than an aircraft.
JSF ‘Confidence’
Brown said he also expects the RAAF to examine requirements for smaller drones once operations in Afghanistan cease, to be purchased outright or under a fee-for-service arrangement.
Australia deploys Israel Aerospace Industries Ltd. Heron unmanned aircraft in that role and may replace them with larger Heron-TPs, also built by the Tel Aviv company, or Reaper drones from San Diego-based General Atomics Aeronautical Systems Inc.
Among other impending orders is one for Lockheed Martin’s F-35 Joint Strike Fighter, of which Australia has bought 14 of 72 it plans to take with the aim of reaching operational status by 2020, two years before Boeing Co. F/A-18 Hornets are retired.
The country has acquired 24 newer F/A-18E/F Super Hornets as a gap filler, while planning to add 12 EA-18G Growlers -- a version of the same aircraft used for electronic warfare.
Additional Super Hornet purchases are unlikely given “increasing confidence” in the F-35 schedule, Brown said.
The initial JSFs will establish three combat squadrons and a training unit, and Australia retains a long-term objective of fielding 100 of the planes, with an order decision likely after 2020 when the Super Hornets will need retiring or upgrading.
Brown said that while he’s a backer of the F-35, he’s frustrated by delays in arming the plane with an anti-ship weapon, regarded as central to Australian requirements.
“A maritime strike missile is an important weapon for us,” he said. “If there was any part of the program I have been disappointed with it has been the slowness to address the maritime strike weapon.”
(BusinessWeek)
Posted by Unknown at 12:04:00 AM