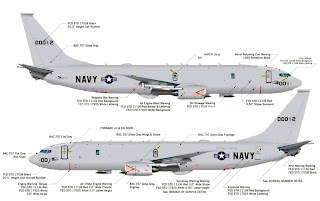 The P-8A Poseidon is a long-range anti-submarine warfare, anti-surface warfare, intelligence, surveillance and reconnaissance aircraft. It possesses an advanced mission system that ensures maximum interoperability in the future battle space. Capable of broad-area maritime, and littoral operations, the P-8A will influence how the U.S. Navy's maritime patrol and reconnaissance forces train, operate and deploy.

The P-8A Poseidon is a true multi-mission platform. On board P-8A, all sensors contribute to a single fused tactical situation display, which is then shared over both military standard and internet protocol data links, allowing for seamless delivery of information amongst U.S. and coalition forces. As an armed platform, P-8A independently closes the kill chain, while simultaneously providing data to everyone on the network.

Boeing's team is developing the P-8A Poseidon for the U.S. Navy, which plans to purchase 117 aircraft. As part of the flight test program, the Navy will have three P-8As at Naval Air Station Patuxent River, Md., in 2010. Initial operational capability is scheduled for 2013. In January 2009 Boeing was selected to provide eight P-8I long-range maritime reconnaissance and anti-submarine warfare aircraft to the Indian navy. India is the first international customer for the P-8. Boeing believes there are numerous other opportunities for international sales to countries currently operating P-3s or similar maritime patrol aircraft. Interest has been expressed by many countries including Australia and Italy.