The People's Republic of China is in the process of jump starting a complete carrier aviation industry and capability for the People's Liberation Army Navy (PLAN), and doing it in relative short order. Nations like the United States, which commissioned it's first aircraft carrier, CV-1, USS Langley in 1922, have been operating carriers and establishing their doctrine through war and peace over the last 91+ years. China is attempting to pull it together in less than two decades.
INTRODUCTION
This development has occurred over the last 10+ years as the PRC purchased, transported to Dalian Shipyards, and then completely refurbished and refit the former Russian Carrier, Varyag, into their own, modern short-take off but barrier arrested (STOBAR) carrier, CV-16, the Lianoning. The Chinese had studied numerous carrier designs before this, including the older Austalian Carrier, HMAS Melbourne, and two of the older Russian Kiev class carriers which they had purchased to scrap and/or create theme parks out of them.
Towards the end of the construction/refit of the Liaoning, the PRC created an entire mockup of the carrier, from the hanger deck up, and set it atop a large research building on Lake Huangjia near Wuhan. This facility has continued to be developed and is now called the Wuhan Naval Research Institute. Deck handling, logistical considerations, armament and weapons handling, and hanger placement and movement of aircraft can all be researched and trained upon at this facility, which will be the object of a seperate article.
Shortly therafter, the PLAN announced and then displayed and flew the prototype of a new carrier strike fighter, the J-15, which is an indegenous, modernized version of the Russian SU-33 aircraft. This aircraft, in conjunction with the trials and commissioning of the Liaomning has now started Low Rate Initial Productrion (LRIP).
But simply having a carrier and having some fighters does not equate to carrier aviation. The individuals flying and maintaining the aircratf must also be developed, significantly trained, and steeped in carrier aviation doctrine, policy, and procedure. This is not an immediate process. It takes many years, and takes significant investment.
The PRC, and the PLAN in particular are in the process of making that investment.
After the commissioning of the Chinese carrier, the Liaoning, within a few months she departed the Dalian shipyards which gave her birth, and sailed to a new naval base that had been constructed for her near Qingdao on the East China Sea. This is her new home port, or home base, which was constructed at significant cost for the carrier and her escorts. This is a significant facility and will also be the object of another seperate article.
THE NEW NAVAL AVIATION TRAINING FACILITY
Throughout this later period, a new aviation facility and air base was being constructed on the shore of the Bohai Sea across from Dalian and well north of Tianjin. This base is a dedicated naval aviation training facility for the airwing personnel who will operate and maintain aircraft off of the Liaoning, and off of future carriers as well.
Here are the location of the four facilites discussed. The new Naval Aviation Training Facility, the Dalian Shipyards, the new Naval Base near Qingdao which is the home port of the new Chinese Carrier, and the Wuhan Naval Research Institute: 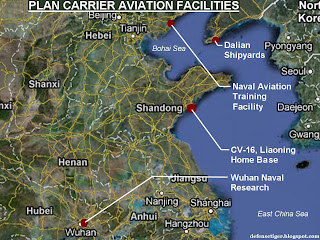 If we focus on the new Naval Aviation Training Facility itself, we find a large naval air base, still under construction, with numerous major features: 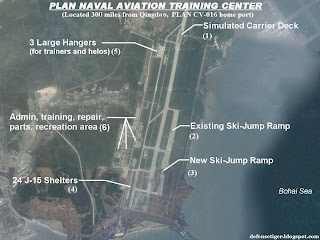 These features include all of the following:
1. A Simulated Aircraft Carrier Flight Deck: 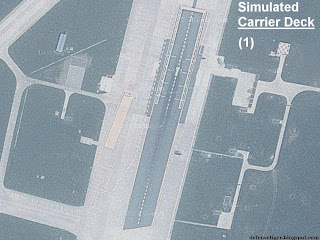 This has been laid out on a portion of the runway for the naval strike fighters, jet aircraft trainers, and helicopters to practice landing on. A close look at the "deck" indicates regular use from ongoing practice/training. 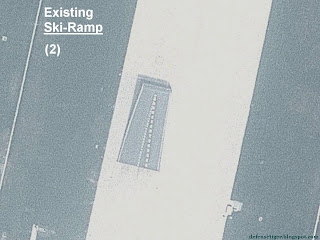 This ramp is an exact replica of the STOBAR ramp on the Liaoning and is being used to train pilots to take off ith the assistance of the ramp. 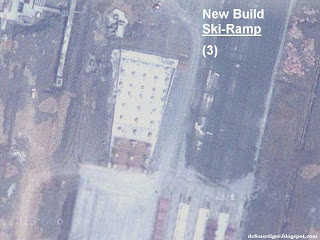 This is a second ski-ramp for even more pilots to train off of. This indicates an increase in the tempo of the training/practise that will be going on at the base, training future carrier pilots for the PLAN carrier(s). 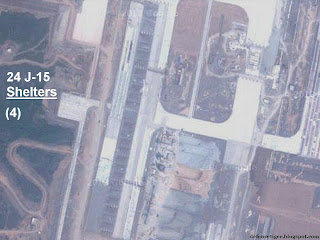 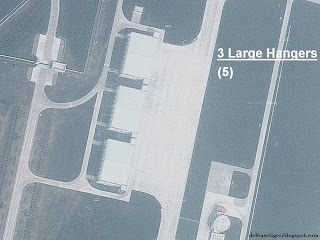 These hangers are for the safe keeping and protection of the training aircraft that will be used to initially train PLAN aircraft carrier pilots, and for the KA-31, KA-28, and other helicopters that pilots will need to be trained on to fly off of the Carrier. These helicopters are for AEW (Ka-31), ASW (Ka-28) and SAR (KA-25 and Z-9) purposes.
6. Administrative, Command and Control, Training, Maintenance and Recreation: 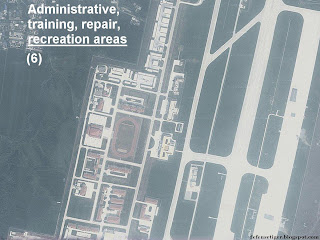 Significant infrastructure is being developed at this base. Buildings for administration, for command and control of the base, for training of pilots in class rooms, for maintenance of the aircraft, and for recreation can be seen already built, with new structures being constructed. At other section on the base, what appears to be signifcant housing units for personnel stationed at the base have been constructed.

Clearly the PRC and the PLAN are investing large sums of money, facilities, personnel and equipment to this significant and strategically important endeavor.

It is a daunting task which is not cheap and will take years to master, and then continue for many decades into the future. But clearly the People's Republic of China, through the People's Liberation Army Navy is intent on mastering it and has embarked on doing so.