India’s Light Combat Aircraft program is meant to boost its aviation industry, but it must also solve a pressing military problem. The IAF’s fighter strength has been declining as the MiG-21s that form the bulk of its fleet are lost in crashes, or retired due to age and wear. Most of India’s other Cold War vintage aircraft face similar problems.

In response, some MiG-21s have been modernized to MiG-21 ‘Bison’ configuration, and other current fighter types are undergoing modernization programs of their own. The IAF’s hope is that they can maintain an adequate force until the multi-billion dollar 126+ plane MMRCA competition delivers replacements, and more SU-30MKIs arrive from HAL. 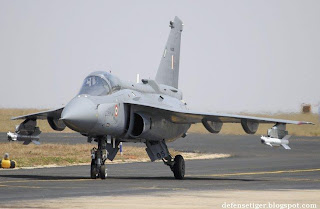 Which still leaves India without an affordable fighter solution. MMRCA can replace some of India’s mid-range fighters, but what about the MiG-21s? The MiG-21 Bison program adds years of life to those airframes, but even so, they’re likely to be gone by 2020.

That’s why India’s own Tejas Light Combat Aircraft (LCA) project is so important to the IAF’s future prospects. It’s also why India’s rigid domestic-only policies are gradually being relaxed, in order to field an operational and competitive aircraft. Even with that help, the program’s delays are a growing problem for the IAF.

Meanwhile, the west’s near-abandonment of the global lightweight fighter market opens an opportunity, if India can seize it with a compelling and timely product.
Posted by Unknown at 3:18:00 AM