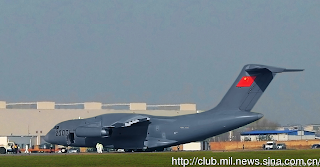 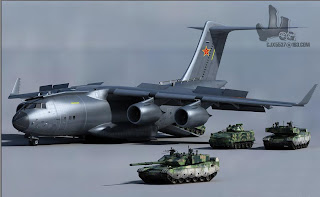 An advanced 4-engine large transport has been under development since early 2000s at 603 Institute, XAC, CAC and SAC which is smaller than American C-17 and based upon some IL-76MD technology (see below). The development was accelerated after the large earthquake in 2008 in Sichuan Province.
Assistance was sought from Antonov Design Bureau in 2008. Its max payload was expected to be 50~66t and max TO weight 180~200t, depending on the exact type of engine powering the aircraft. Fitted with high-lifting devices along the wing leading and trailing edges plus six pairs of main landing wheels, Y-20 is capable of taking off from relatively short and unpaved runways, making many unpaved airfields behind the battlefield accessible. Like C-17, it may also feature supercritical wings which give the aircraft a better fuel economy thus further extends its range.
Currently it is unclear whether the aircraft will have an IFR probe installed or not. Other features include a four-crew glass cockpit with HUD and air data sensors mounted on top of and beneath the head section. Overall Y-20 appears fatter and shorter than Il-76MD, bearing some resemblance to Japanese C-2 and Ukrainian An-70 transport. This suggests that its cargo bay dimension is a wider and taller, making it more versatile by being able to to carry a variety of oversize load, including a ZTZ99 MBT. The prototypes and the initial batch are powered by Russian D-30KP-2/WS-18 turbofan, later by the modified WS-10 (WS-20 Huanghe?) high-bypass turbofan (as Y-20A?).
The head section of a full-scale metal mock-up was constructed by 2008 and the first flight is projected in 2012. On August 20, 2009 SAC started to build the rear fuselage of the first prototype. It was reported (April 2010) that the full-scale mock-up was completed in early 2010. It was speculated that the aircraft might serve as the testbed for the Chinese airborne laser weapon prototype similar to American YAL-1 which is thought to be under development. Y-20 is also expected to be converted to a tanker replacing the obsolete H-6U (see below). It may also serve as the carrier of the next generation AWACS replacing KJ-2000.
In January 2012 it was rumored that the airframe of the first prototype has been constructed, to be fitted with the avionics and engines. So far a total of two prototypes (001 & 002) have been constructed. The first low speed taxiing took place on December 21, 2012 at the CFTE airfield in Yanliang. The first flight of prototype 20001 took place on January 26, 2013. Currently the 001 prototype has been wearing a new dark blue color scheme. The latest rumor (May 2013) suggested that the second prototype (20002) just rolled out of the assembly line.
Posted by Unknown at 3:56:00 PM