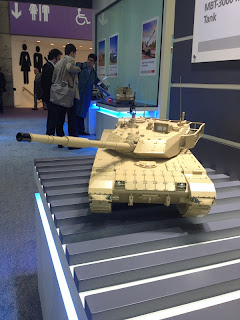 China’s North Industries Corporation (NORINCO) also displayed their Main Battle Tank 3000 the company hopes to deliver to the Chinese Army in two years, Cheng said. It’s one of the few, if not the only, company to be developing a main battle tank. The tank can reach speeds up to 42 miles per hour with a cruising range of 500 km. It has a fording depth of four to five meters and a trench of 2.7 meters. The maximum gradient is 60 percent.Engineers mounted a 125mm smoothbore gun onto the MBT 3000. The main gun can fire APFSDS, HEAT and HE shells and gun launched missiles with a maximum missile range reaching 5,000 meters. MBT 3000 also features a 12.7 mm anti-aircraft machine gun and a 7.62mm coaxial machine gun. Tankers can also fire from 8 76mm smoke grenade launchers and 4 76mm shrapnel grenade launchers. It carries 38 rounds of main ammunition with a loading speed of eight rounds per minute with 22 rounds on the loader. An un-cooled thermal imagery is installed for the driver while a second generation cooled thermal imager is provided for gunner and the tank commander. The engine is a water-cooled turbocharged electronic-controlled diesel engine with 1300 horsepower. The tank is fully digitized with inertial navigation and GPS. Engineers also built a new fire extinguishing and explosion suppression system.
Posted by Unknown at 2:03:00 PM