The Al Fahd armoured vehicle has been developed by the Abdallah Al Faris Company for Heavy Industries, which is based in Saudi Arabia at Damman, just north of Dharan near the coast of the Persian Gulf.

The Al Fahd is the first armoured vehicle designed and built in Saudi Arabia and entered production of 100 vehicles for the Saudi Arabian National Guard in 1998. It is an 8 wheeled armoured vehicle. The vehicle is available in two variants: the AF-40-8-1 Armoured Personnel Carrier (APC) and the AF-40-8-2 Armoured Fighting and Reconnaissance Vehicle (AFRV).

The armoured fighting vehicle accommodates a crew of four. The vehicle can be equipped with a turret for the installation of 105mm low recoil weapons on the AFRV, and 40mm weapons on the personnel carrier. The driver's station is equipped with a suite of day and night vision periscopes. Day and night vision scopes can also be fitted to the crew stations. 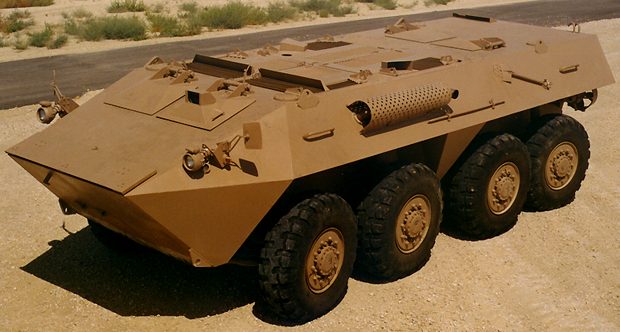 The Al Fahd is equipped with a twelve-cylinder 550hp Deutz air-cooled engine. A water-cooled engine is an available option. The vehicle has a ZF 6WG-200 powered gearbox by Zahnradfabrik Passau GmbH. The unit is of layshaft design with hydraulically actuated multi-plate clutches engaging the gears, and a hydrodynamic torque converter as the starting device.
For use on prepared roads, only the middle four wheels are powered and steered, and the maximum speed is 90km/h. 550l of diesel fuel are carried, giving a maximum range of 600km.

The vehicle is able to negotiate natural and engineered trenches to 2,500mm and 2,000mm.

The chassis, engine, transmission, suspension and levelling system are designed to provide a high level of performance for crossing rough and variable terrain. For travelling across rough terrain, the drive and powered steering are applied to all eight wheels. The vehicle's levelling system operates in both manual and automatic mode. The vehicle is able to negotiate slopes up to 80%, side slopes to 55% and natural and engineered trenches to 2,500mm and 2,000mm.
The vehicle's suspension system is a combined nitrogen gas spring and hydraulic damping system. For weapon firing, a series of valves on the nitrogen gas system is closed to provide a firmer hydraulic suspension system. Once the main weapons are discharged the nitrogen gas system is reinstated into the vehicle suspension system and the vehicle is ready to proceed across the rough battlefield terrain.
An hydraulic amphibious system is available as an option. The maximum amphibious speed is 8km/h. The hull is water-sealed and airtight. 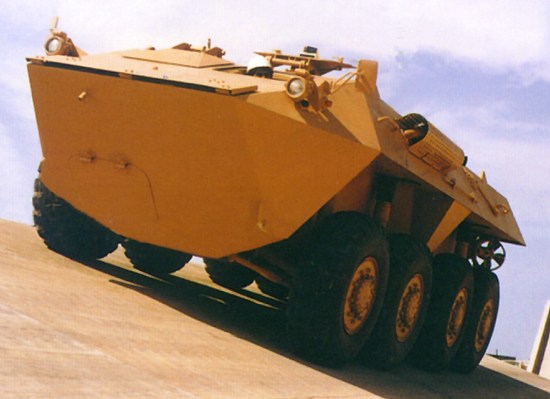 Al Fahd is able to negotiate side slopes to 55%.

Over very rough terrain and in negotiating large obstacles, the combined gas and hydraulics suspension system provides a very smooth and comfortable ride

Construction of the hull incorporates high alloy single steel sheets with layers of multi-Kevlar material for extra protection against anti-personnel ammunition. Air-conditioning together with nuclear, chemical and biological filtering are fitted as standard. A manual fire fighting system is fitted with an automatic system as an option.

An hydraulic amphibious system is available as an option. The maximum amphibious speed is 8km/h. The hull is water-sealed and airtight. 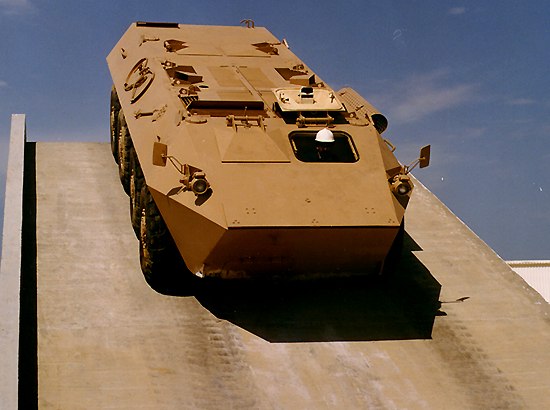 Al Fahd can both climb and descend gradients of 80%. 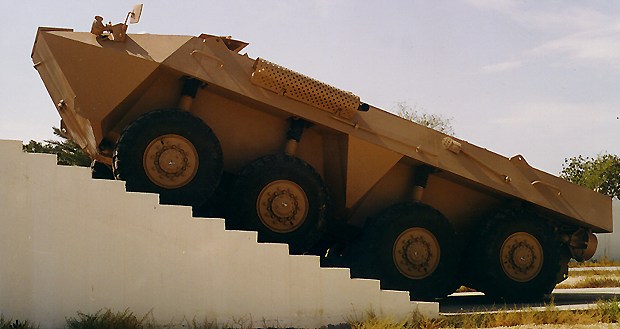 Wheels were selected rather than a tracked system because they provide better manoeuvrability on both roads and rough terrain.

The Armoured Personnel Carrier variant, model AF-40-8-1, has the capacity to carry 11 equipped troops plus the driver. The position of the engine in the APC is at the front instead of the rear of the vehicle. A large ramp door (which is not fitted on the fighting vehicle variant) at the rear gives access to the troop compartment.
The APC can be equipped with a turret for weapons up to 40mm calibre, and also an optional number of firing ports can be installed.
The fuel capacity of the two vehicles is the same. The smaller engine, the Deutz 10 cylinder, 400hp engine, combined with a lower operating empty weight and combat payload, gives a 800km cruising range, which is 200km further than that of the fighting vehicle.
Posted by Unknown at 8:00:00 PM