A fighter F-15J 's Air Self-Defense Force (ASDF) Japan's lost a piece of the front horizontal stabilizer during air show on Sunday (29.11). The fragment of 2.4 m appears in the video above falling off the plane. In the photo to the right stabilizer of hunting after the accident. 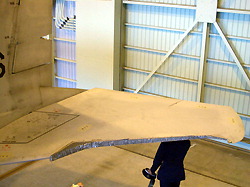 The ASDF began an immediate inspection of its fleet of 202 F-15s, which will be "groundeados" until the scan is complete.
The pre-flight was normally performed and revealed no problems and the ASDF is investigating.
SOURCE : The Mainichi Daily News