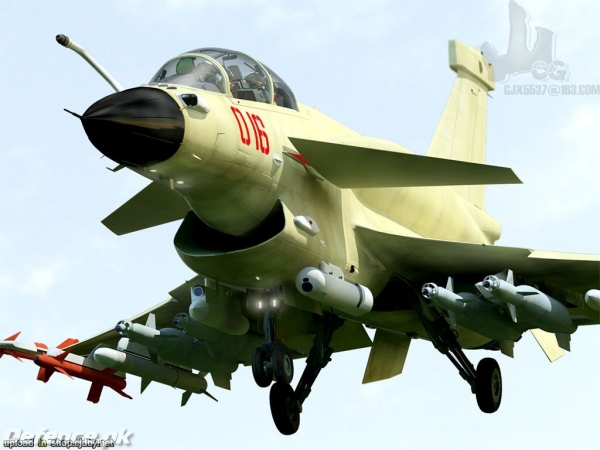 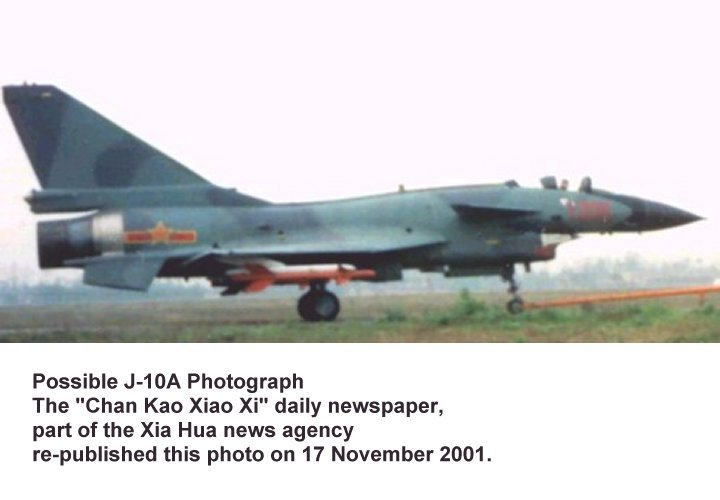 The Chengdu J-10 (Jian-10, or F-10 in its export name) is a single-engine, all-weather, high-performance multirole fighter aircraft capable of both air-to-air and air-to-ground roles. The aircraft was designed by Chengdu-based 611 Aircraft Design Institute and manufactured by Chengdu Aircraft Industry Corporation (CAIC). The aircraft is available in single-sear fighter (A variant) and tandem two-seat fighter-trainer (B variant) versions. The aircraft first flew in 1998 and entered the PLA Air Force (PLAAF) service in 2003. About 50~70 examples are expected to have been delivered by 2006. These planes are powered by a Russian-made AL-31FN turbofan engine, while on later production variants this will be replaced by Chinese indigenous WS-10A “TaiHang” turbofan. The total number of production may be as many as 300.
The J-10 development programme, also known as “Project 8610”, officially began in 1986 to counter the fourth-generation fighters such as MiG-29 and Su-27 then being introduced by the Soviet Union. The aircraft was initially designed as an air-superiority fighter aircraft but changing requirements later shift the development towards a multirole fighter. It was widely speculated that the J-10’s initial design was based on the cancelled Israeli Aerospace Industry (IAI) Lavi lightweight fighter. Despite the denial by both Chinese and Israelis, the high resemblance of the two aircraft appears to support this claim. Russia provided key assistance to the aircraft development after 1990 by helping Chengdu engineers integrate the Lyulka-Saturn AL-31F turbofan engine into the aircraft.
The J-10 is single-engine fighter with a rectangle belly air intake, low-mounted delta wings, and front canard wings. The airframe possesses a large vertical tail, as well as canards placed near the cockpit. The air intake is rectangular in shape, and is located beneath the fuselage. The aircraft is the first Chinese-made fighter to be fitted with a large two-piece bubble canopy to provide 360 degrees of visual coverage for the pilot. If necessary, the aircraft could be fitted with an in-flight refuelling probe.
The J-10 fighter represents the highest achievement of the Chinese aviation industry today. The aircraft achieves high manoeuvrability by using a large amount of composite materials in its fuselage and wing structures to reduce the its overall weight and thus increase the thrust-to-weight ratio. The aircraft design is aerodynamically unstable, to provide a high level of agility, low drag and enhanced lift. The pilot controls the aircraft through a computerised digital, quadruplex (four-channel) “fly-by-wire” (FBW) system, which provides artificial stabilisation and gust elevation to give good control characteristics throughout the flight envelope. The aircraft’s cockpit avionics and fire-control system are also believed to be superior to those of other Chinese indigenous fighter aircraft.
In the late 1990s, the U.S. Office of Naval Intelligence estimated that the J-10 could be as manoeuvrable as the U.S. F/A-18E/F Super Hornet. With its advanced “fly-by-wire” system, the J-10 may have a better aerodynamic performance compared to the Russian Su-27, which still uses the conventional control method. The Hong Kong-based newspaper Sing Tao Jih Pao reported on 29 May 2004 that during an aerial war game conducted by the PLAAF, the J-10 fighter has beaten the Su-27 fighter in all three rounds of “dogfight” in the mid-air.
The J-10A single-seat fighter entered service with the PLAAF in 2003, with 50~70 examples delivered so far. The production continues at a rate of 2~3 units per month. The two-seat variant J-10B joined the service In 2006. The aircraft may become available for export market by 2007~08.