Qiam-1 new Ballistic Missile of Iran, Has it been equipped with maneuverable warhead?

Introduction  of Qiam-1 and its Features

Some days ago (2011-05-22), Ahmad Vahidi, Iran’s defence ministry started  delivery of Qiam-1 missiles to IRGC, in published images of delivery ceremony at least ten missiles are seen. But warheads haven’t been shown. 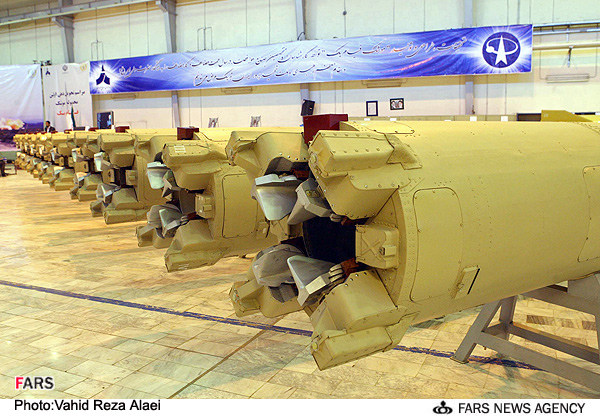 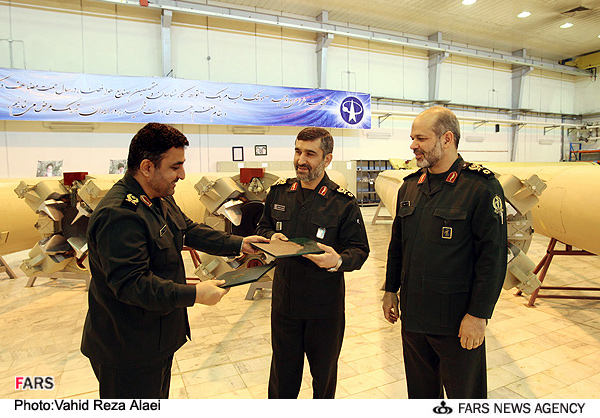 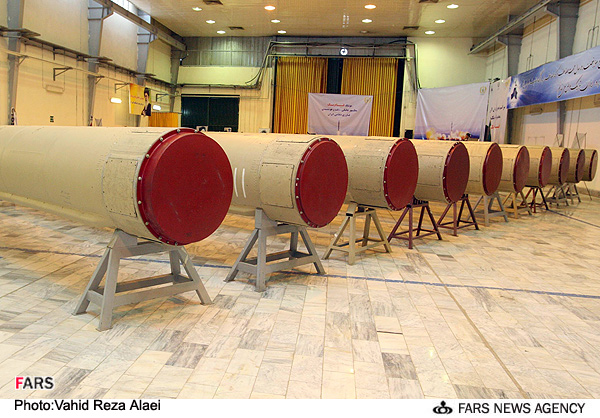 Last year in middle of the summer (2010-08-20) Iran test fired this new finless ballistic missile. Ahmad Vahidi Defence Minister of Iran introduced Qiam-1 missile for the first time in a congregation of people on Tehran University campus on Friday  :

“Being a new class of Iranian missiles, Qiam 1 has been equipped with new technical specifications and exceptional tactical powers,” Vahidi noted. “Qiam 1 is part of the new generation of the Islamic Republic’s surface to surface missiles with liquid fuel and completely designed and built domestically,” the Iranian minister stated. He explained that the missile is equipped with a smart navigation system, which decreases the possibility of it being targeted by other projectiles. Vahidi added that the liquid-fuel missile’s launch time is low due to its smart targeting system.”It enjoys enhanced agility due to the scrapping of its fins,”
Vahidi stressed, adding that the missile can hit targets with high precision.

In a Persian language edition report of Vahidi remarks by IRIBnews.ir, it has been mentioned that increased thrust of engine is another feature of Qiam-1 missile. He stated Guidance, control and navigation systems of Qiam-1 create a capability of being Smart during flight path of Qiam-1, this capability causes significantly increase in accuracy of missile. he also mentioned  maneuverability is another feature of Qiam-1. 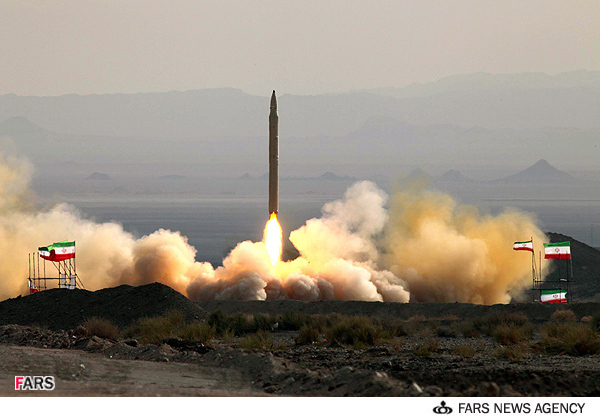 A day after test firing of missile (2010-08-21), Head of the Defence Ministry’s Aerospace Industries Organization General Seyed Mehdi Farahi told Fars News Agency that high velocity, radar-evading and launching from different launchers are some of features of this missile. He mentioned different stealth features like material used in this missile has been considered in this missile .
At first glance having no fins and a triconic warhead like warheads of Ghadr-1/Sejil are most noticeable features of it.
First (?) generation (or prototype) of triconic warhead of Shahab-3:

After several years of observing such triconic warheads on Iranian missiles, Last year, such warhead was seen on a new North Korean missile, for the first time : 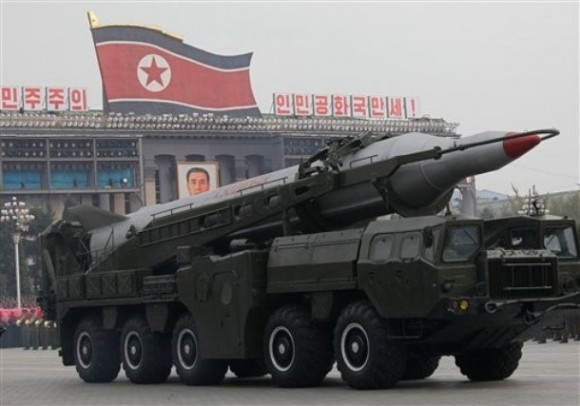 Having no fins on this missile means less drag (more speed and more range), less RCS (more difficult to detect and track and target it by anti ballistic missile systems during boost stage of flight of missile) and new triconic separable warhead increases accuracy and difficulty of targeting warhead in terminal phase of flight of missile.
Fins in Ballistic missiles are used to stabilize missile during boost stage (and re-entering to atmosphere in the case of non separable warhead), so many people believes Qiam-1 uses advanced guidance systems that retains stability of missile during boost stage even without fins. They also believe this new guidance system increases accuracy of missile.
Another different feature of Qiam-1 in comparison to Scud and Shahab1&2 missiles is its launcher, Unlike Scud, Qiam-1 doesn’t use a MAZ-543 TEL and uses new semi-trailer TEL like TEL’s of Shahab-3, Sejil and Ghadr-1 missiles. 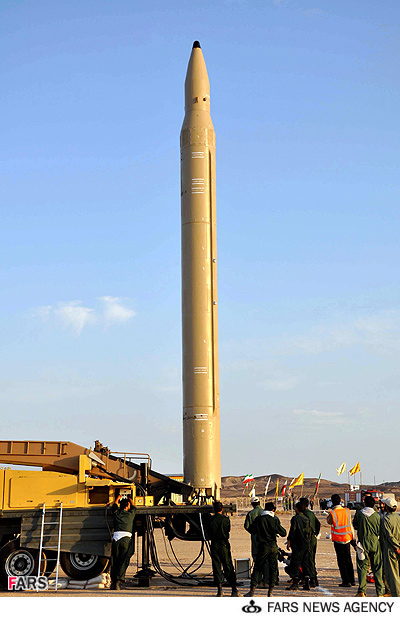 Estimations of dimensions of Qiam-1: Does it use Scud engine ?

One of the most noteworthy debates about Qiam-1 since the first hours after unveiling it, was estimation of its dimensions. Notice to above image, If you calculate length of the man with white hat and length of missile in Photoshop by pixels and then using the actual height of man as a scale, you can estimate real dimensions of missile. I assumed length of man equals to 1.8 m ( most people in Iran are shorter and are between 1.7 to 1.75m). so maximum length of missile will be around 9 meters and diameter of it will be around 70 cm.
But many people believe this method isn’t a proper method for estimation of dimensions of missile, because the white hat man is closer to camera rather than TEL, but some other peoples such as me don’t agree with them because distance of camera to man and TEL is much more than distance between the man and TEL, so distance between the man and TEL can not affect much on estimation. Another error in this method is caused by different angle and distance from camera to bottom and top of the missile.
I tried to check accuracy of this method by estimation of dimensions of SCUD-B by this method. I found two similar images of SCUD-B and an image of Shahab-2. 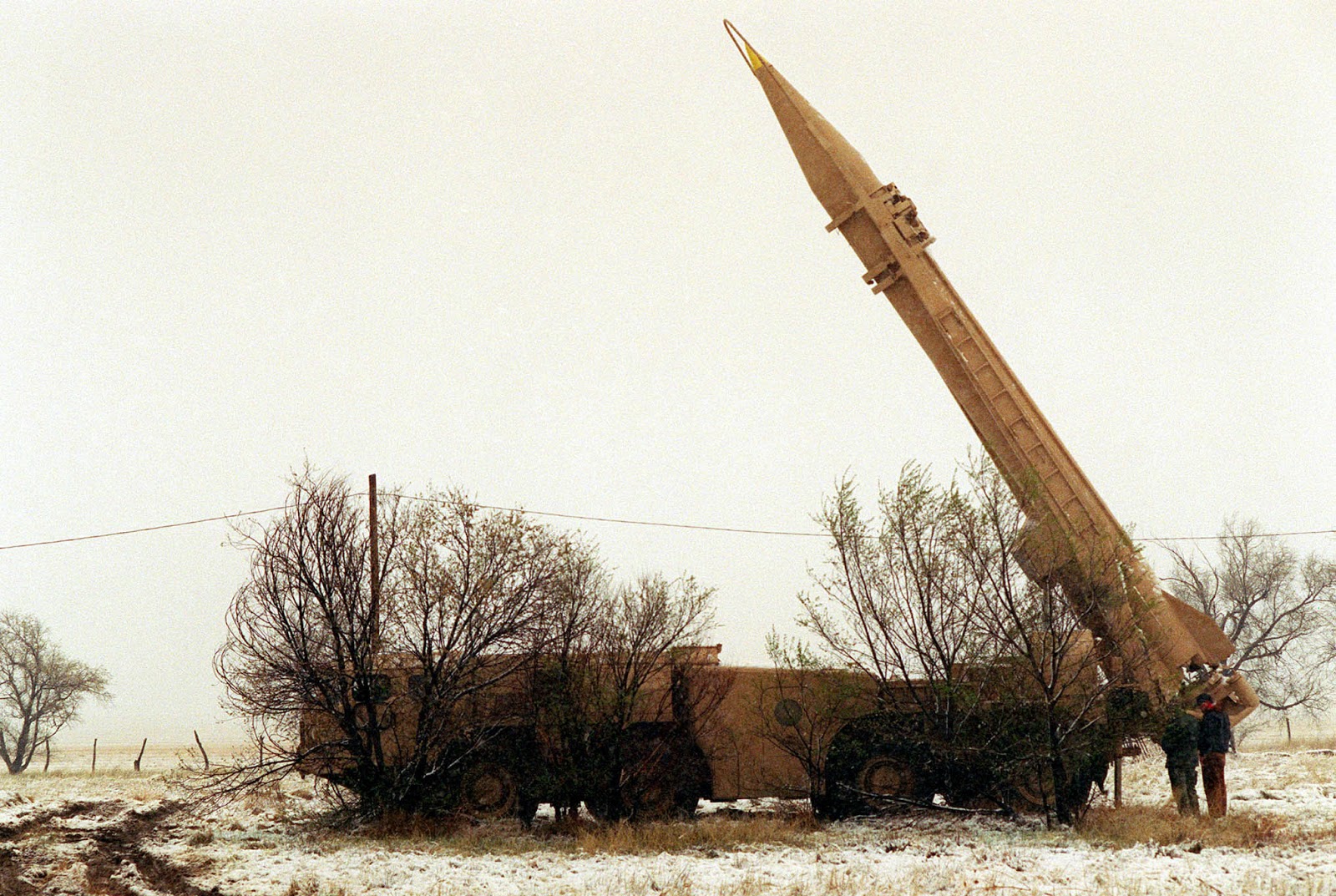 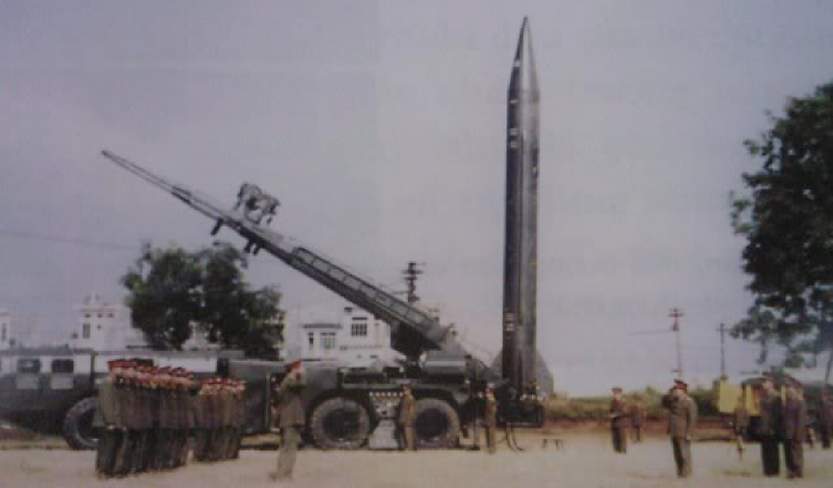 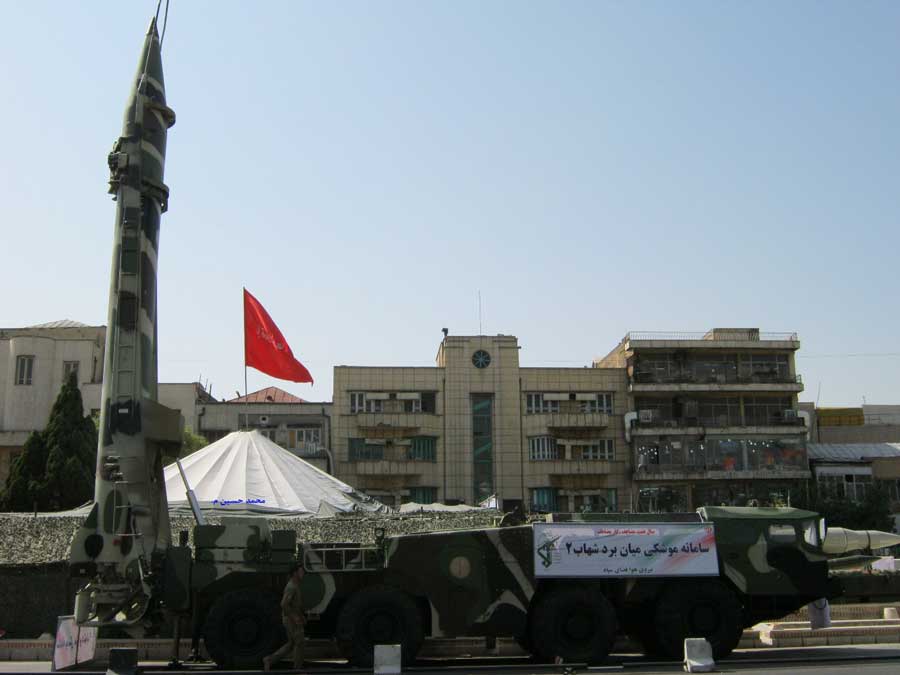 So I couldn’t reach to a certain conclusion that does Qiam-1′s engine actually based on Scud’s engine or not. But almost all people agree that length of Qiam-1 is shorter than Scud-B, most of them believe it has the same diameter of Scud and uses the same engine of it (it seems logical, why should they design a new and smaller engine whereas they have scud engine?) and just a little shorter (around 10.4), others believe it is a new completely smaller missile with less diameter.

Does Qiam-1 use vernier thrusters for terminal guidance?

Another debate about Qiam-1 missile is four mysterious things which are seen on the warhead of missile. In fact this is the difference of warhead of Qiam-1 with Ghadr-1 and Sejil. last year a mock-up of Qiam-1 missile was showed in an exhibition during “Holy Defence Week” (in September 2010) in Tehran. But there weren’t these things on warhead of that mock-up. 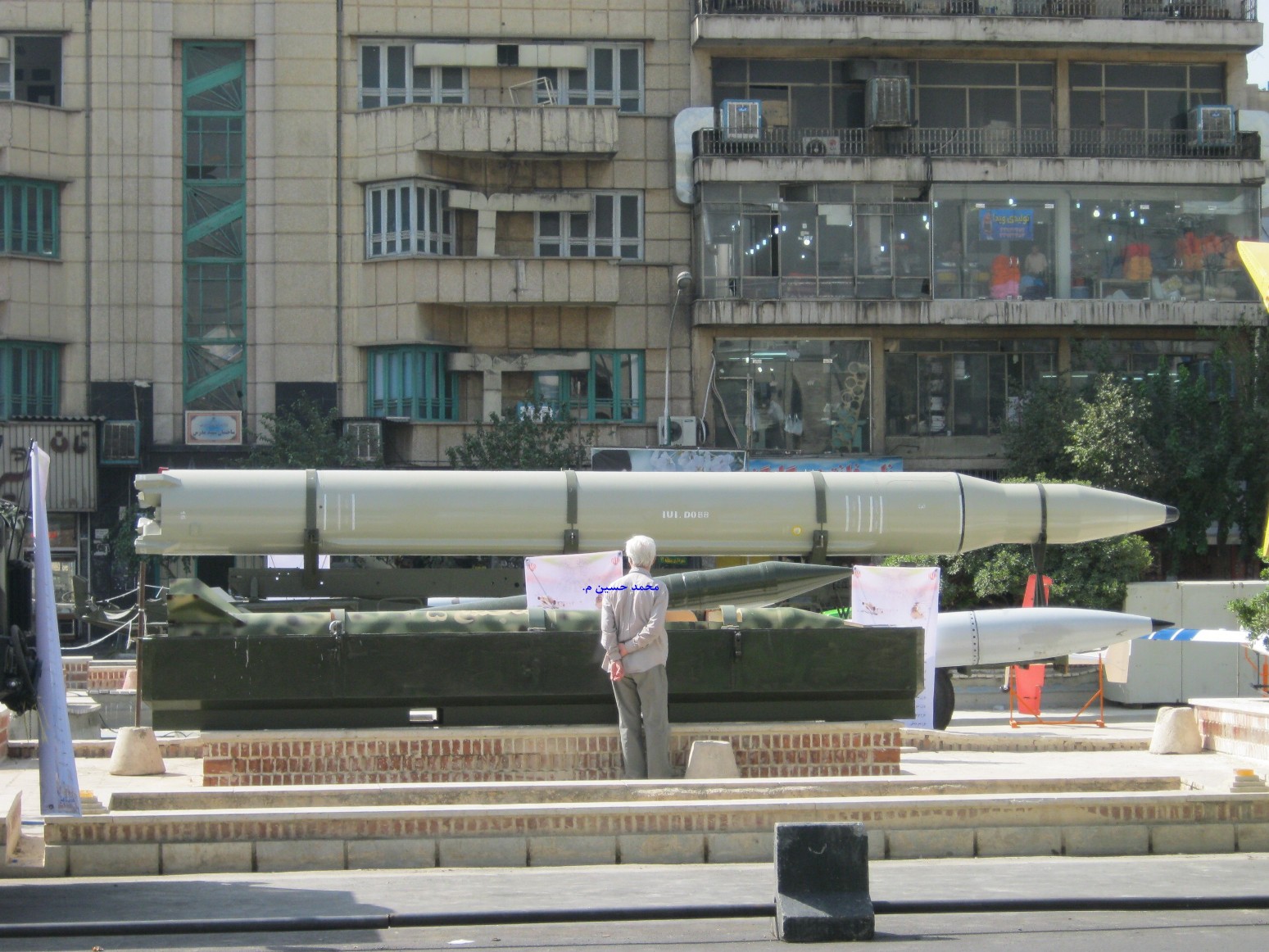 Almost all people agree that Qiam-1 uses a separable warhead, but many people believe its warhead  isnt a  maneuverable re-entry vehicle. unlike them, I think there are reasons that indicate those things can be vernier thrusters.
If you notice to those things on the warhead, you can distinct three identical things with 120 degree angle with each other and one another thing different than these three things there. 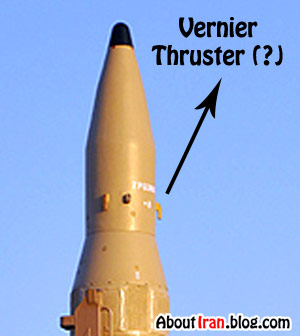 Some people say those things are antenna, but I want to ask them what type antennas? What is task of them? I haven’t seen such antenna on other Iranian missiles and even on other ballistic missiles, (if you have seen, I will be glad if you tell me). Notice to the shape and 120 degree configuration of them, are they similar to antenna?  I think no.
That special shape and 120 degree configuration of them is proper for thrusters. Some people say they aren’t thrusters because orientation and position of them isn’t proper to guide warhead, but I don’t think so.
Notice to shape of warhead, it is horizontally symmetrical, so center of mass of warhead has been located on the vertical axis of warhead. But as you see bottom part of warhead is bigger than upper part of it, so center of mass of warhead has been located on the vertical axis of warhead and closer to the bottom of warhead.
Now if you notice to the position of those three identical things, you find them closer to bottom of warhead. It is possible to conclude those three things and center of mass of warhead, almost have the same distance from bottom of warhead (or at least they have very close distances from bottom of warhead) On this positions, created force of thruster with parallel direction to the vertical axis of warhead create most possible torque for rotating warhead, because force of thruster enters to a line that pass from center of mass and direction of force is  perpendicular to that line. If the force orientation has any other angle with that line, we should break force (ftot) vector to two other force vectors, one (fx) on the line between thruster and mass center of warhead, another (fy) on an axis perpendicular to this line, so in this case the force that can create torque is fy that is smaller than ftot and so created torque is smaller. 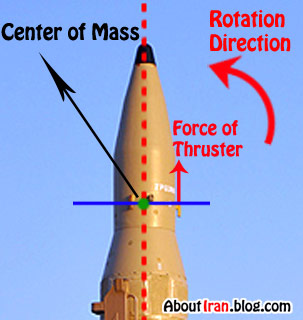 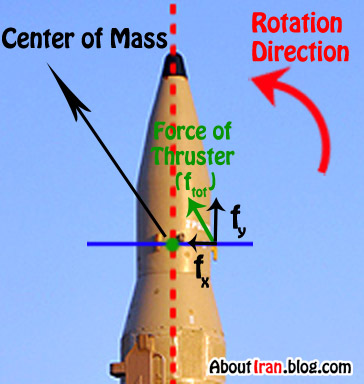 I searched some missile to find such things on them, I find some missile like 8k69 missile that uses four such similar shape vernier thruster on the second stage of it:

In addition to above observation, consider Vahidi remarks about maneuverability of missile and also smart guidance, control and navigation of Qiam-1 during terjectory of missile which decreases the possibility of it being targeted by other projectiles. (if we assume his remarks isnt just for propaganda)
Current ABM systems like PAC-3 or even longer range SM-3 and THAAD intercept BM’s in post-boost stage not boost stage. so above remarks of Vahidi  isnt about boost stage of trajectory, and for a smart guidance, control and navigation of warhead in post-boost stages, when  warhead is separated from booster of missile, steering system like vernier thrusters is needed on warhead.
Another question about Vahidi remarks is “Maneuverability”. Does he mean maneuverability during boost stage? Has term of “maneuverability” any usage in boost phase? Or maneuverability can be used just in post-boost phase (midcourse and terminal) of trajectory of missile because missile doesn’t need to maneuver during boost phase. If he means maneuverability in boost stage, so it doesn’t need to mention it as a feature because all missiles have this ability. And if he means post-boost stages, so warhead needs independent steering system capable to produce thrust.
Two days ago Iran launched second satellite into orbit. Iran released an animation about launching Rasad satellite. I saw two small thrusters (brake engines) on top end of first stage of Safir SLV which pushes back first stage after separation from second stage, I obtained a low quality of that clip and captured some pictures of sepration from that clip to show those thrusters :