Alert 5 posts Chinese military hardware pictures straight from the ground, but they can lack context as PLA troops or brave civilians snap photos of classified military manuevers and post to Weibo
Today's featured photo is a Chinese Z-10 attack helicopter saddled with "Ferry Tanks" to fly extra distance and return without refueling. While we can't say where the photo was taken or pinpoint the choppers destination, we did report the PLA earlier this week announced its army aviation unit of attack helicopters were shifting from logistics missions to combat status. 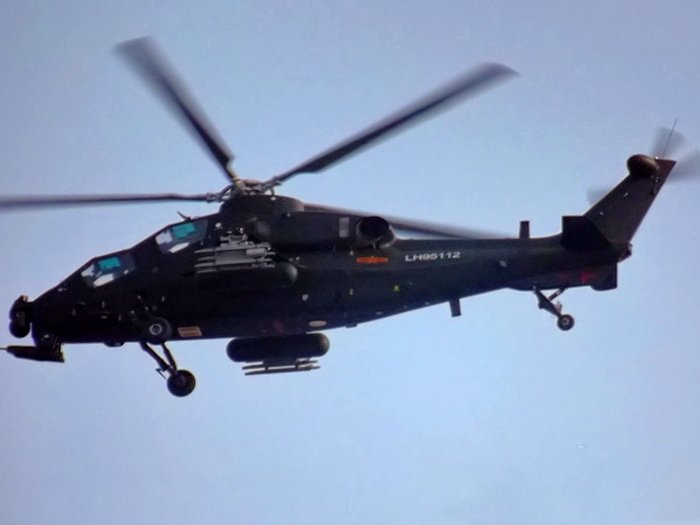 The PLA Daily, China's official military newspaper:
The [helicopter] unit will work on major missions such as long-distance tasks, large scale offshore operations, attack coordination with other units and large scale airborne operations, it said, adding that the unit will also aim to improve its operation capability based on IT technologies.
The English PLA Daily army section has several announcements related to its helicopter units, their accelerated training, and even troops psychological readiness for "military transportation in high-tech wars".

The Ferry Tanks seen in the picture would be particularly useful in long-distance tasks, large scale offshore operations, attack coordination with other units and large scale airborne operations.

If engaged in the Diaoyu/Senkaku island dispute, the Z-10s could be stationed at Air Base Shuimen to the east. Round trip to the islands is out of reach of the Z-10s, without support ships like the Haixun 21 deployed to the South.
But it's possible China's fleet of 48 Z-10s, spread across four attack squadrons of a dozen birds each, could act in some localized support.

Satellite imagery of the base came to light in 2009, and experts believe it was completed late last year.
The Taipei Times reported in May 2012 that J-10 combat aircraft, Su-30 fighters, and various unmanned drones were arriving at the base. 
The Shuimen airbase compliments China's nearby East Fleet that maintains 35 ships in the region, including its newest warship the Type 054, seven submarines, and eight additional landing craft.In addition to aircraft, experts  believe Russian made S-300 long-range surface-to-air missiles ring the airbase, providing some of the best missile protection in the world. The S-300 is comparable to the U.S. made Patriot missile system sent recently to Turkey for its first line of missile defense against Syria.
Among the subs are four Kilo-class diesel-electric Russian made boats capable of the most advanced underwater warfare.
The Z-10 would provide a fine air support element to the fleet with its prototype powered by Canada's Pratt & Whitney engines and software. That's the deal which put that company in hot water for violating the Arms Export Control Act last year and incurred a $75 million fine against it.
The Z-10 is an attack helicopter designed for air-to-ground assaults with limited air-to-air abilities, very similar to the U.S. Apache AH-64. Wikimedia Commons
AH-64D over Baghdad (Click to expand)
From Military Today:
The Z-10 helicopter has a standard gunship configuration with a narrow fuselage and stepped tandem cockpits. Gunner is seated at the front and the pilot is at the rear. The fuselage has sloped sides to reduce radar cross section. All vital areas are believed to be protected by armor plates.
Weapons of the Z-10 may consist of 30-mm cannon, HJ-9 anti-tank guided missiles (comparable to the TOW-2A), newly developed HJ-10 anti-tank missiles (comparable to the AGM-114 Hellfire) and TY-90 air-to-air missiles. It can also carry un-operated rocket pods.
The prototype of the Z-10 is powered by two Canadian Pratt & Whitney PT6C-67C turboshaft engines, delivering 1,531 hp each. However indigenous engines might be used on production helicopters. It might use the same engine of the WZ-9 helicopter, but it is less powerful than Canadian design.