A Glimpse of Al-Khalid MBTs: The Immortal Tank (In Service with Forces) 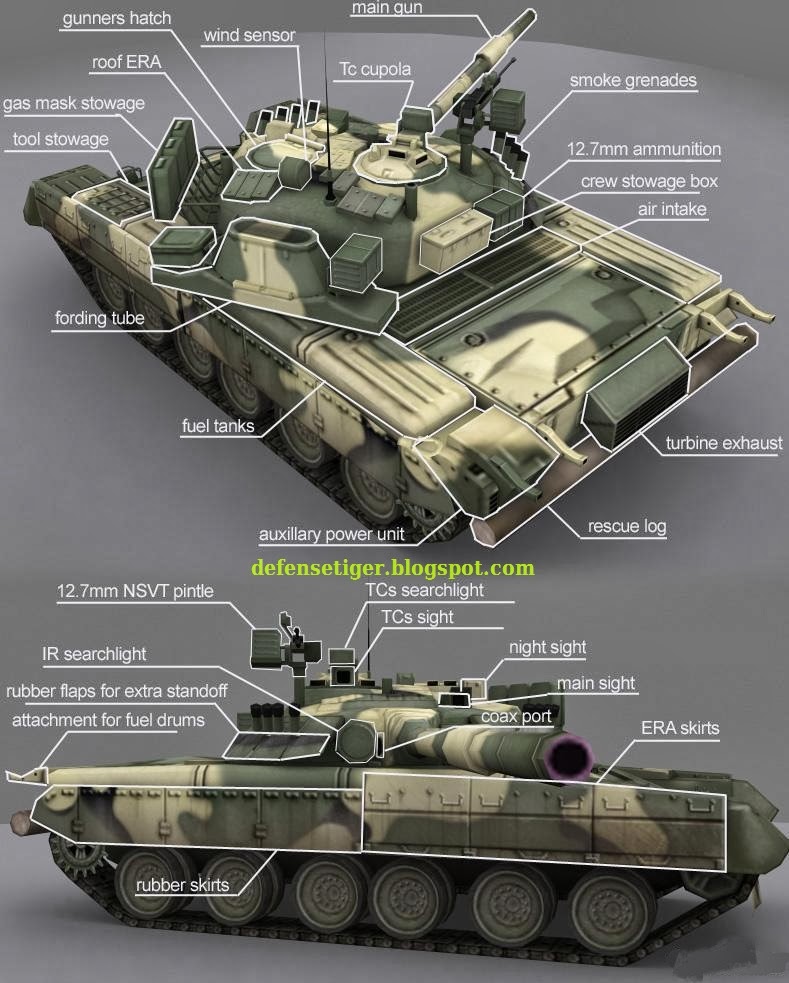 The Al-Khalid MBT (The Immortal Tank) is jointly developed by Pakistan and China during the 1990s, which is one of the world's most modern main battle tanks. The design is considerably smaller and lighter but this is an amazingly very effective and capable main battle tank. The design has the combination of some western and Sino-Russ technological influences. 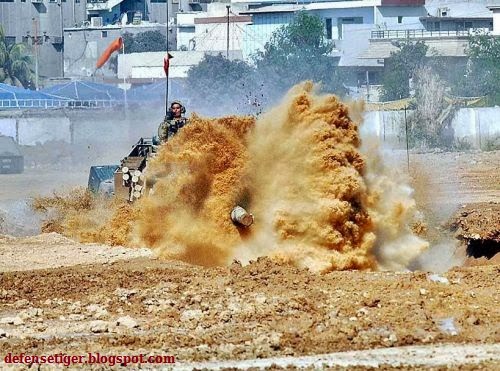 In light of high ambient temperatures and the fine sand or dust that would be encountered in operational areas such as the deserts of southern Pakistan, the development of high performance cooling and air filtering systems was emphasised during the planning stage of the project. Implementation of a hydro-gas suspension system was considered but, after detailed technical evaluations, it was found to be impractical due to various limitations such as problems with reliability and maintainability.

The final tank design resulting from a decade of co-operative development was designated Type 90-IIM in China & Al-Khalid in Pakistan.

A pilot batch of fifteen tanks was inducted into the 31st Cavalry Regiment of Pakistan’s Armoured Corps on 20 July 2001. 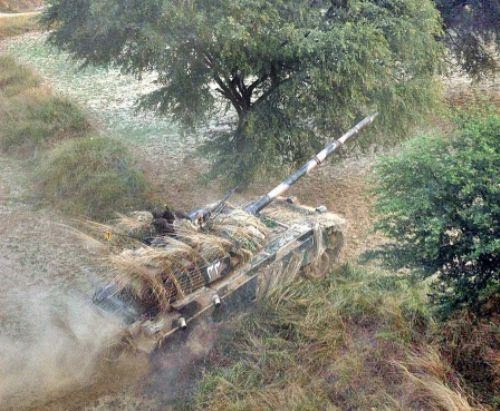 In 2006 a US-based market and special research organisation reported findings showing that the Al-Khalid, along with two other MBTs, would account for nearly 45% of all new MBTs built until 2015.

The Saudi Arabian Army began conducting trials of the Al-Khalid's desert performance in April 2006, after expressing interest in purchasing a batch of the tanks 2 years earlier. 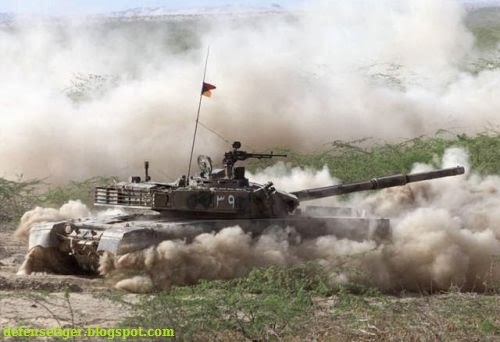 Al-Khalid was revealed on 17 July 1991, by the then Prime Minister of Pakistan, Mian Muhammad Nawaz Sharif, along with the then Pakistani Chief of Army Staff, Mirza Aslam Beg, in a ceremony held at the Heavy Rebuild Factory (HRF), Taxila. In his speech, the Prime Minister said that that the completion of the project was a big step towards self-reliance. The Army Chief said that for the first time in history, not only had technology been transferred to Pakistan, but the design was also made by Pakistani engineers themselves. 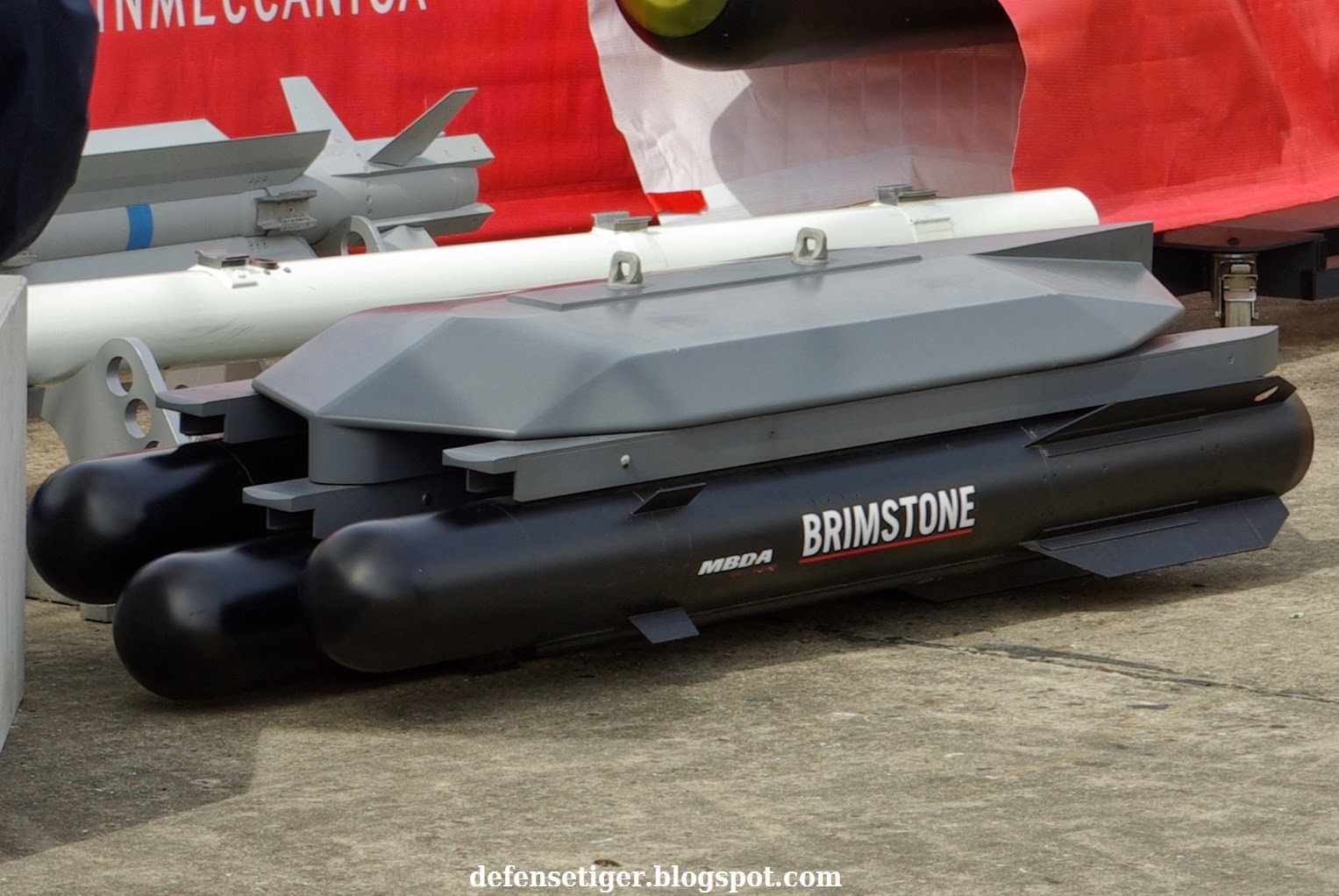 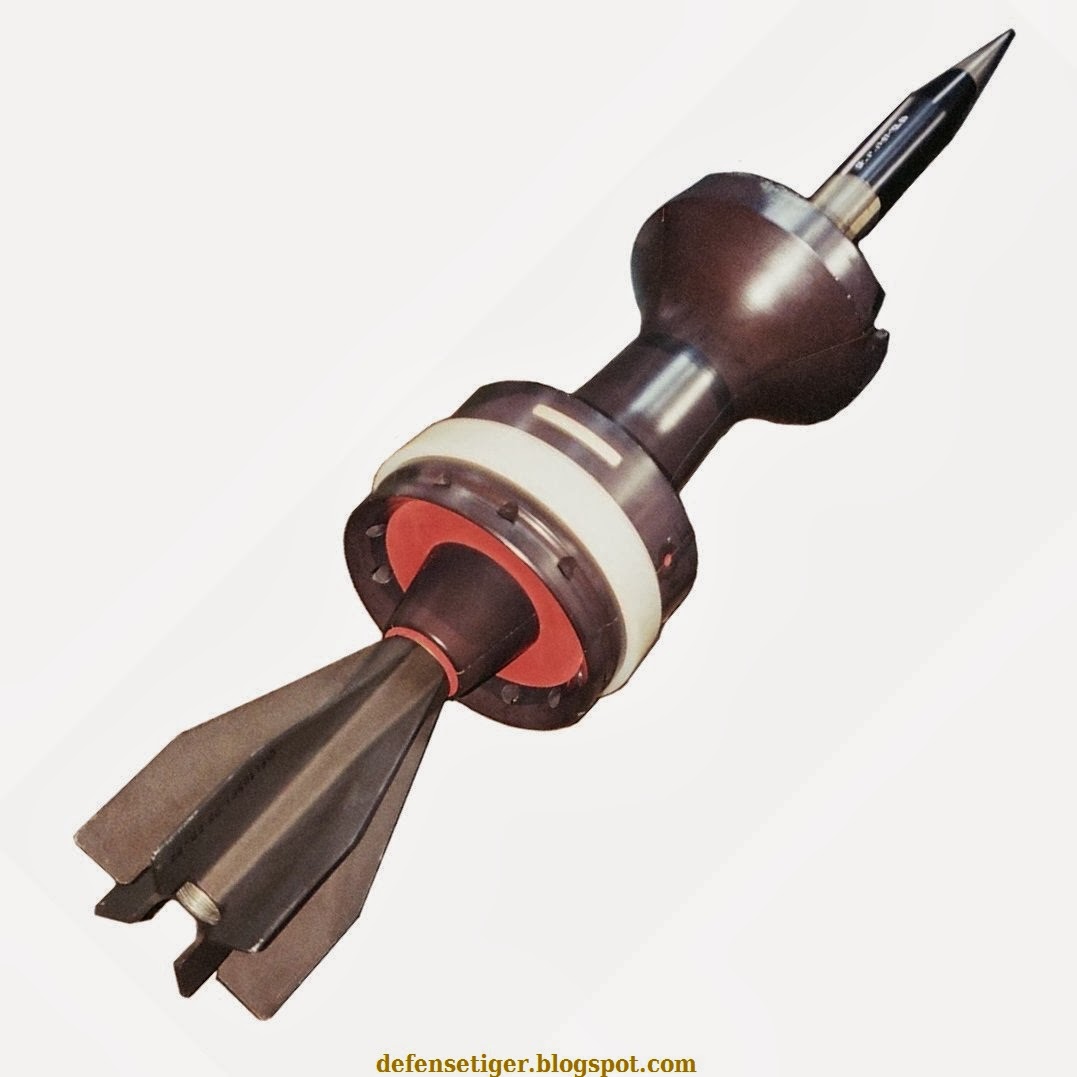 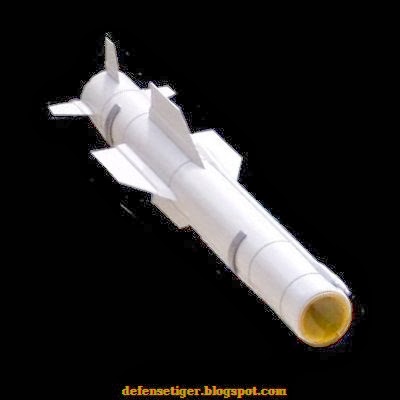 * Al-Khalid is designed with a 125 mm (length: 48 calibres) smoothbore, auto-frettaged and chrome-plated gun barrel which can fire the following types of conventional ammunition: APFSDS, HEAT-FS and HE-FS. 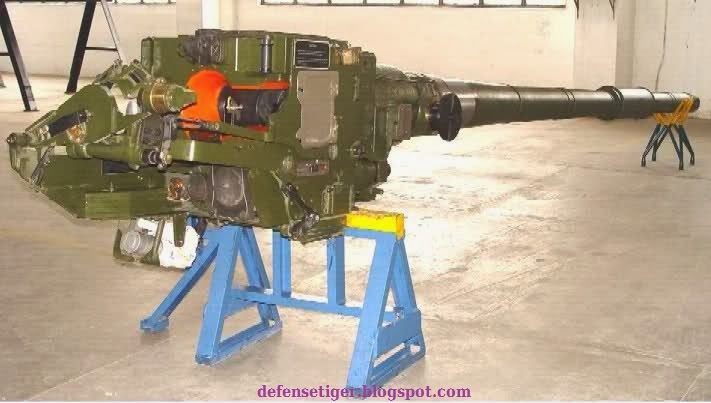 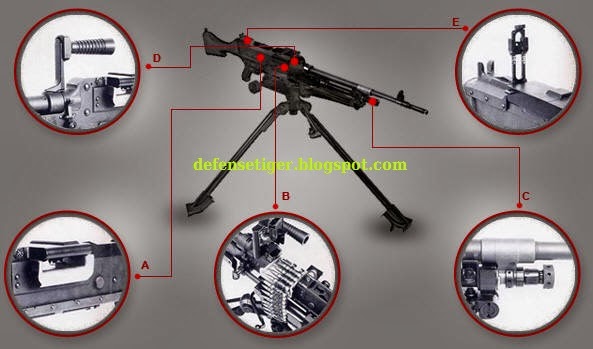 * Al-Khalid also fires a Pakistani DU round, the Naiza 125 mm DU round (armor penetration: 550 mm in RHA at 2 km). It is equipped with a muzzle reference system and dual-axis stabilisation system. Elevation and azimuth control is achieved by electro-hydraulic power drives. The automatic ammunition-handling system for the main gun has a 24-round ready-to-fire magazine and can load and fire at a rate of eight rounds per minute

* The tank is also equipped with a 7.62 mm-coaxial machine gun, a 12.7 mm externally-mounted air-defence machine gun that can be aimed/fired from within the tank, and smoke grenade launchers.

Previously, HIT imported 125 mm gun barrel blanks from France for the two tanks which would then be machined in Pakistan by HIT. The first Pakistani gun barrel blank was produced at Heavy Mechanical Complex (HMC) in a joint project involving HIT, People's Steel Mills Limited (PSML) and other defence-related organisations.

The specialist grade steel was produced at PSML and the resulting steel block was passed on to HMC. HMC then pressed the block to a length of 5 metres and square cross-section, before forging it into a 125 mm smoothbore barrel. The barrel was then heat treated several times in facilities such as a large vertical furnace. The process took 2–3 months and was watched by experts from other defence-related organisations.

The barrel was to be capable of firing at 4 rounds per minute as well as being compatible with the autoloader and its 24 round magazine. According to a HIT official, a joint team proved to the Pakistan Army that strict standards would be met before the army approved production of a first batch of 50 gun barrels by HMC.

The Pakistani gun barrels would likely be installed on upgraded versions of the Al-Khalid which are under development by HIT. A Rs200 million PKR contract has been finalised by HIT for the first 50 barrel batch.

* The gunner is provided with a dual-magnification day sight and the commander with a panoramic sight for all-around independent surveillance. Both sights are dual-axis image stabilised and have independent laser range-finders. The tank has true hunter-killer capability, giving the commander the ability to acquire new targets independently while the gunner is engaging another target. The automatic target-tracking system is designed to work when tank and target are both moving. Night vision for the gunner and commander is achieved through a dual-magnification thermal imaging sight. Both sights are integrated with the fire-control system. The production Al-Khalid tank has a fire-control system of western origin. The ballistic computation time is less than one second. The manufacturer claims routine first round hits on standard 8 ft (2.4 m) square targets at ranges over 2,000 meters. 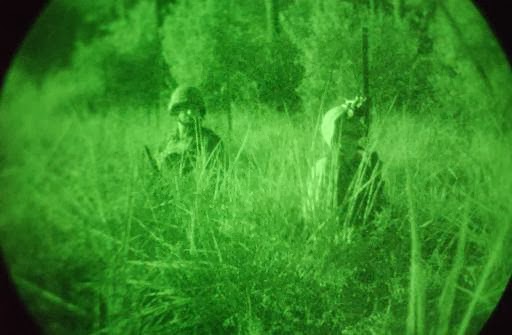 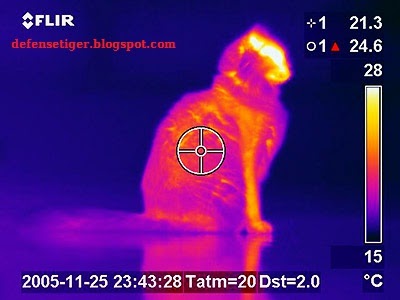 * The tank is equipped with the "Integrated Battlefield Management System" (IBMS), named 'Rehbar', a digital communications system developed domestically by HIT and CARE (Centre for Advanced Research in Engineering). It comprises a flat-screen display mounted inside the tank which communicates with those of other vehicles, including command posts such as the HIT Sakb. It uses a data-link to facilitate secure communication of battlefield information between units, including tank video footage and information from unmanned aerial vehicles (UAV).

The Al Khalid layout is conventional, with the driver’s compartment at the front, turret in the centre and the power pack at the rear. The turret and hull are of all-welded steel armour construction and an additional layer of composite armour has been added over the frontal arc, to which explosive reactive armour (ERA) can be added if required. Al-Khalid has modular composite armour and explosive reactive armour, nuclear-biological-chemical (NBC) defences, an effective thermal smoke generator, internal fire extinguisher and explosion-suppression system.

The production model Al-Khalid is powered by a 6TD-2 liquid-cooled diesel engine, designed by the Kharkiv Morozov Design Bureau (KMDB) of Ukraine. The 6TD-2 is a supercharged 6-cylinder engine delivering 1,200 horsepower (890 kW). The 2-stroke design, with the pistons arranged horizontally in an opposed piston configuration, makes the engine very compact and therefore more suitable for being fitted into relatively small vehicles such as the Al-Khalid MBT.

The 6TD-2 engine drives a French-designed hydro-mechanical automatic transmission, the SESM ESM500, which is also fitted to the Leclerc MBT. Capable of manual and fully automatic power-shifting, the transmission has 5 forward and 2 reverse speeds along with a braking system that incorporates carbon friction brakes and a secondary speed-retarding system. Gear shifts are controlled by a torque converter which is made more efficient by addition of an automatic lock-up clutch. There is also a mechanical back-up system for use in emergencies, able to shift 2 gears forward and reverse.
The Al-Khalid is fairly lightweight as compared to the Western tanks, weighing 46 tonnes compared to the 60 tonne M1 Abrams and Leopard 2. A power-to-weight ratio of 26.66 hp/tonne gives acceleration from 0 to 32 km/h (0 to 20 mph) in 10 seconds and a maximum speed of 70 km/h, the speed and agility also helping to improve survivability.

The standard version of the Al-Khalid is equipped with a snorkel. The snorkel system allows the tank to cross water obstacles up to 5 meters deep, after some preparation by the crew. Navigation is assisted by an inertial navigation system (INS) and a GPS satellite navigation system.

Al-Khalid has modular composite armour and explosive reactive armour, nuclear-biological-chemical defences, an effective thermal smoke generator, internal fire extinguisher and explosion-suppression system. The infrared signature of the tank is reduced by infra-red reflective paint. Al-Khalid 1 is equipped with a newly developed indigenous explosive reactive armour, which is not only lightweight, but also more resistant to APFSDS, HEAT and HE-FS rounds. ERA is developed by Global Industrial Defence Solutions (GIDS) Corporation. Al-Khalid is also equipped with an Active protection system known as VARTA. HIT is also working on an indigenous APS system for future batches especially for Al-Khalid 2. In tests it has 350mm~450mm vs APFSDS and 450mm~550mm vs HEAT.
An advanced laser detection system from Al Technique Corporation (ATCOP) is present, the ATCOP LTS 1 laser threat warning system developed by Institute of Industrial Control Systems. LTS 1 consists of a mast-mounted sensor and operator's control box, which includes a display showing threats 360 degrees around the tank. It can detect laser rangefinders and laser target designators and responds automatically by triggering acoustic alarms, smoke generators and other countermeasure systems. LTS 1 can detect laser devices operating in the 0.8 to 1.06 µm waveband, has a 360° field of view in azimuth (resolution of 15°) and a field of view in elevation of -15° to +90°. Operating voltage is 12V or 24V DC nominal with power consumption being 8 W nominal. The sensor head is 165 mm in diameter and 35 mm high while the control box is 80 x 130 x 55 mm in size. Laser Threat Sensor LTS786P is an early warning device which gives audio and visual alarms of threat by sensing a laser beam aimed at it from any direction. The exact location of the threat (incoming beam) is indicated by nine LEDs, covering all directions above horizon. It has the capability to differentiate between a Laser Range Finder, Laser Target Designator or a Laser Target Tracker Signal. In addition, provision of sensor output signal, interfacing for appropriate countermeasures, is also available. It can be used on stationary or moving objects of any size or shape. The maximum operating range is 10 km.