No US warships in Black Sea – Russian Defense Ministry 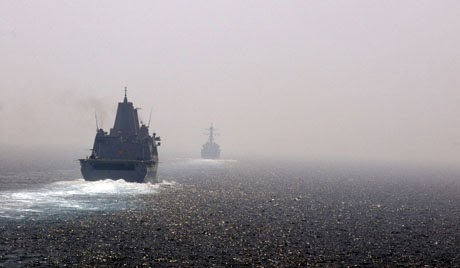 No US warships have entered the Black Sea, the Russian Defense Ministry’s official spokesman said on Monday.

The guided missile frigate USS Ramage (DDG-61) and the command ship USS Mt. Whitney with 600 marines deployed aboard have come to the Black Sea, a military diplomat told the Russian news agency on Monday. "The frigate USS Ramage and the flag ship of the US Sixth Fleet, the USS Mt. Whitney, have arrived in the Black Sea. They have passed through the Dardanelles and Bosporus Straits lately with Turkish consent. More than 600 U. marines are stationed aboard the ships," the source said.

Judging by the vector of their movement, one may presume the US warships are headed towards the Ukrainian Black Sea coast.

A visit of the US warships to the Russian territorial waters is not on the agenda as of yet, the source said.

The USS Mt. Whitney, a Blue Ridge class command ship, is the flag ship of the US Sixth Fleet. It has a displacement of 18,400 tonnes, a length of 189 meters and a speed of 23 knots. The ship carries defensive artillery weaponry and a helicopter.

The USS Ramage (DDG-61) is a guided missile frigate commissioned on July 22, 1995. It has a displacement of 8,775 tonnes and a speed of 32 knots. It carries tactical strike weapons, Tomahawk cruise missiles, guided air defense missiles, artillery, anti-sub, mine and torpedo armaments, and a helicopter. The ship has a crew of 337, including 23 officers.

The Pentagon told reporters earlier that the ships would pay the visit as a part of standard military planning for security purposes during the Sochi Olympic Games.