Turkey Pushes T-129 Gunships for Pakistan, but US Could Scupper Deal (Article)

ISLAMABAD AND ANKARA — Turkey is aggressively lobbying to give T-129 attack helicopters to Pakistan to replace its aging AH-1F fleet and is prepared to agree to generous terms with cash-strapped Pakistan to do so, according to sources. 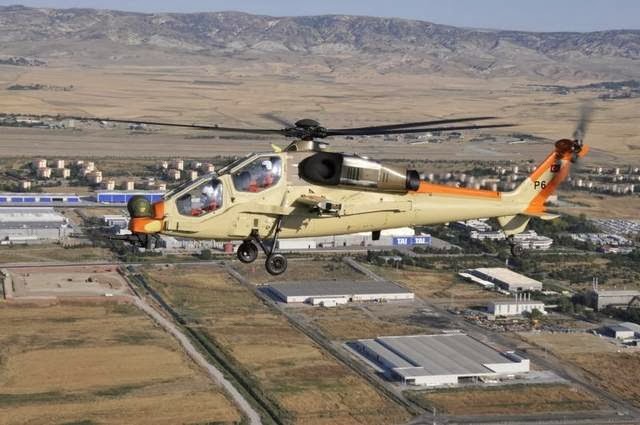 However, the US could sink the deal and make a counteroffer of helicopter gunships to Pakistan that could be too good to refuse.

Pakistani media reports state a deal with Turkey could lead to local production of the T-129 at Pakistan Aeronautical Complex (PAC), but speculation that preparations are already underway to build a new helicopter production facility there could not be confirmed.

Turkey made its latest push during Pakistani Prime Minister Nawaz Sharif’s Sept. 16-18 visit to Turkey for the Third High Level Cooperation Council meeting. Sharif was given a demonstration of the T-129’s capabilities and a potential deal was discussed.

Turkish officials confirmed talks have “matured to a certain extent,” and Turkey remains committed to any possible deal, not only for financial benefits but also potential strategic gains.

“We see that both countries are keen to cooperate,” said one senior procurement official in Ankara. “We have a longer-term vision over any deal. We do not aim to win just one foreign contract but also view spillover benefits for the local industry. The Pakistani market may win international recognition for the T-129 and pave the way for future contracts.”

The official declined to comment on the modality of any deal.

However, a Pakistani source familiar with the negotiations said Turkey had offered to gift three T-129 helicopters to Pakistan with 2,300 items of spares. The T-129 variant in question was not clarified. The initial T-129A is being used for flight testing while the full specification T-129B is still under development.

Turkey followed the same approach in securing a deal for MKEK 155mm Panter howitzers with Pakistan in 2009. It is now produced in Pakistan by Heavy Industries Taxila.

However, a Turkish procurement official dealing with international agreements and financing voiced doubt over Pakistan’s ability to afford a deal.

“We know that Pakistan is not in the best financial shape. But this could be overcome with political will,” he said.

Salma Malik, assistant professor at the Department of Defence & Strategic Studies at Islamabad’s Quaid-i-Azam University, is uncertain, but not dismissive, saying this “depends on how and what kind of budgetary allocation the concerned offices have, and how they have outlaid it.”

A more serious potential obstacle, however, is obtaining US permission to export the LHTEC CTS800-4N engine powering the T-129.

A US industry source in Ankara said a US export license for the T-129’s engine would be critical. “This may require complex deliberations in Washington, involving many industrial and political parameters,” he said.

“It is most unlikely that either the White House or the Pentagon would attempt to deny an export license to Turkey for T-129 power plants and ancillaries, but the Defense Security Cooperation [Agency] is required to notify Congress of most proposed sales and obtain approval,” he said.

“Given the mood of Congress, it is extremely difficult to predict what they might or might not do. It takes only a couple of members or senators to demur, and the whole process could be halted. Everything depends on the political mood of the moment.”

Nevertheless, Turkey hopes the T-129 will be an export success.

The T-129 has been going through acceptance tests before deliveries for the Turkish military. Officials expect the first delivery to be made within the next few weeks.

“We may complete the delivery of the first nine helicopters by the end of the year,” Bayar said. “After these helicopters make their way into the Turkish inventory, I believe they will have strong chances for export.”

Azerbaijan is reportedly looking to buy 60 T-129 helicopters. Jordan’s King Abdullah, who was in Turkey in March, visited Turkish Aerospace Industries, co-maker of the T-129, and examined both the helicopter gunship and Turkey’s first locally-developed drone, the Anka.

Despite Turkey’s hopes, however, the US might try to tempt Pakistan with a deal for the AH-1Z Viper helicopter.

No one at the defense section in the US Embassy would comment on the matter, but details were confirmed by sources in Pakistan familiar with the deal.

Pakistan has been awarded US $300 million in foreign military financing for FY2013-2014, which could be used to procure the Viper attack helicopters, made by Bell.

This is part of a wider deal discussed during US Deputy Defense Secretary Ashton Carter’s trip to Islamabad on Sept. 17.

Cloughley, however, does not believe Pakistan will be tempted.

“I do not think that Pakistan would be tempted to ditch the T-129 deal if there were an offer of Vipers. There might be a good deal proposed by the US, but operating costs are high and would [argue] against acceptance. Further, and probably more significant, there is decided and most strong opposition in Pakistan to further deals with the US.”
Posted by Unknown at 5:34:00 PM