... AND BLEW IT'S NOSE?
Part 2 - The true story of the USS San Francisco blown hull.By BK Limhttp://bklim.newsvine.com/_news/2011/10/06/8191631-part-2-the-true-story-of-the-uss-san-francisco-blown-hull
BK Lim 20 Sept 2011 (revised 5 Oct 2011) A great and powerful nation founded on the ideals of freedom and democracy; the beacon of hope, innovations and justice for the rest of the world, is a constant target for destruction by power-greedy cabals from within ~~~ warnings from former Presidents.
Only Americans can hurt America. ~Dwight D. Eisenhower
America will never be destroyed from the outside. If we falter and lose our freedoms, it will be because we destroyed ourselves. ~Abraham Lincoln
The coverup of the USS San Francisco involvement in the 2004 Sumatra Quake-tsunami disaster is one more evidence confirming the scandalous and deceptive use of global mass media, US government machinery and military might to forward the devious agenda of the cabal-controlled US administration.
There is little doubt now the 26 Dec 2004 quake-tsunami was triggered by design. USS San Francisco was involved in the covert undersea operation when “an accident” caused one of the nuclear devices to explode from within the nuclear submarine; port side of the bow. The US navy strike forces which had been on high-alert standby at Hong Kong and Guam bases (weeks before, now we know why) immediately sprang into an emergency rescue operation; thinly disguised as a humanitarian mission to the tsunami hit Acheh province. When asked how they could have sprung so fast into action, the military spokesman had no choice but to reply hollowly with a prepared statement: “We have been training for this type of humanitarian mission for 12 months now”. Really?
Australia was informed to standby helicopters for emergency rescue if the need arose before the arrival of the US strike force. Australia was needed to provide the alibi that the USS San Francisco was on the way to Brisbane on a liberty (leisure) port call when the accident happened. The spin masters, main stream media and internet bloggers, ….err..er cyber warriors (aka trolls) jumped into overdrive to stamp out any “speculations or conspiracy theories” that might have accidentally stumbled on the truth.
The chaos in the aftermath of the quake-tsunami disaster helped mask the actual rescue operation of the badly damaged USS San Francisco. As the world's policeman and only superpower suspected of having a sophisticated tsunami weapon, the US could not afford to be seen (even remotely) involved in the widely suspected man-made disaster which killed more than 230,000 people in 14 countries. Many of the affected countries were on friendly terms and looked up to the US leadership. With their credibility badly bruised for instigating the 2003 Iraqi War on the false pretext of “nuclear WMD that could not be found”, the Bush-Cheney hold on to power could precariously slip. Never mind the international image of a “devil in disguise” US leadership. 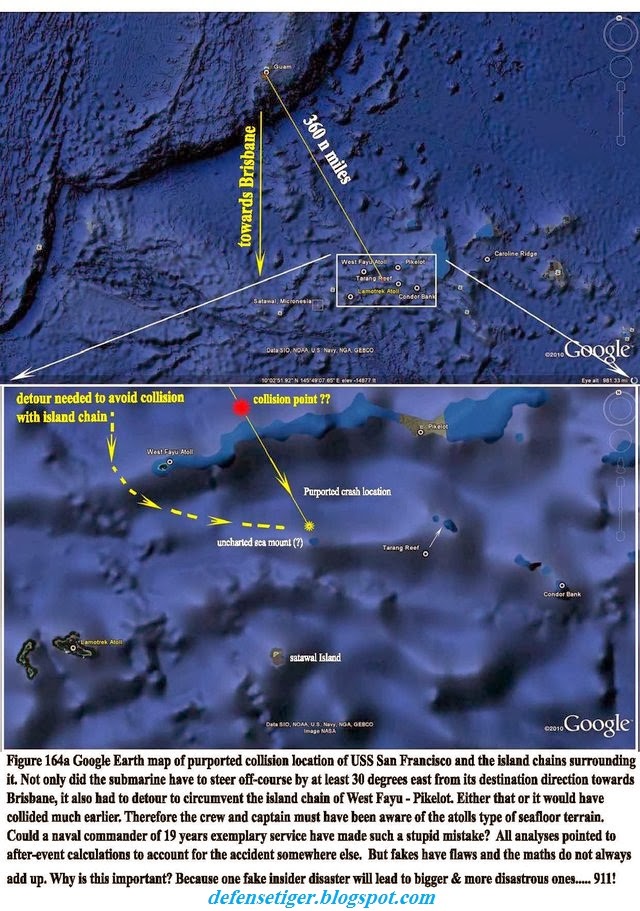 None of the countries outside NATO were strong enough to mount an attack on the US, even though the ulterior motive of the 2004 Sumatra Quake-Tsunami was to provoke the world and to escalate the simmering Middle East crisis into a full-blown world war.
The Middle East crisis was disappointing to the Neocon Nazis. It did not spread and escalate into a full blown world war as they had hoped for. No, the Bush-Cheney administration was not worried about world opinion. Publicly, they could not be seen to be wanting war. Their extended war efforts needed the irrevocable mass support from the mis-informed Americans. To achieve this, they needed the opposing powers to strike first; just like Pearl Harbour. But after the exposure of the Gulf of Tongkin, Enron and 911 deceptions, the truth of the USS San Francisco involvement in the 2004 quake, would have exposed and blown wide open the Cabalists' agenda. The White House was able to pull off the tall story of “high speed grounding and head-on collision” 350 miles south-east of Guam (the nearest convenient shoals) only with the paid assistance of the main stream media and their global cyber machinations.
Did JP Wheeler, a close military aide to the Bush-Cheney Administration, finally piece the isolated facts together in the aftermath of the 2010 BP's Mega Oil Spill in the Gulf of Mexico; to conclude that mega disasters such as the 2003 Iran Quake, 2004 Sumatra Quake and 2006 Taiwan Quake which all occurred on 26 Dec, were the results of US-military covert subversive operations?
If they could fake the grounding incident of the USS San Francisco and Gulf of Tongkin, what else did they fake? The War on Terror? Al Qaeda terrorists' threats? Did JP Wheeler know too much and was he going public?
But how do you take out an American war hero without incurring the wrath of the masses? Drowning in a bathtub had already been used on the late Matts Simmons. There had been too many small plane crashes involving prominent personalities already. Out right murder or suicide would arouse even more suspicion for such a distinguished public figure who had fought in real battle fields unlike Bush and Cheney. False charges of child pornography like in the late Dr TB Manton's case, would take too long. Besides, it would look ridiculous for a high security clearance Pentagon aide who had worked so closely with the Bushes” administration for so many years. In the end, they chose the most undignified death in the dumpster method.
Sure, it would raise questions but the furore would die down with an investigation that would lead nowhere. Hell, anyone in the state of Delaware could be the murder suspect based on the main stream media broadcasts of the bizarre circumstances in the 3 days of disappearance since 28 Dec2010; before his body was found in a dumpster on New Year eve. If you cannot hide, you can at least numb the public's reaction with an outrageous murder. We could not help noticing the obsession with the last week of the year. We had 3 quakes exactly on 26 Dec (2003, 2004, 2006) and now 28-30 Dec 2010 (the days Wheeler went missing). Could all these be coincidental? Not so if you were to correlate the oil and stock market trends with these and other man-made disasters. Natural disasters are difficult to predict with precision but not disasters triggered on demand.
“You can run but you cannot hide” ….Pres Bush in his warning to the terrorists in his proclamation on the War-On-Terror.
Bush's public speeches were full of Freudian slips. His facial and body languages showed. The planners of 911, man-made disasters like quake-tsunami and mega oil spills would not have gone through with their evil schemes if they knew they could not get away Scott free. Is that why Bush was warning the terrorists “they cannot hide”? Hiding is what real terrorists do best unlike public figures like Bush. So why is Bush stating the obvious? Bush's war crime record is many times worse than Kim Jong Il's. Yet he could stand on the podium still be hailed as an “honorable” man without the use of force (publicly). The difference between the two can only be …....mass deception! Yes they were all honorable men as Brutus and those senators were who murdered Julius Caesar more than 2,000 years ago ….....Antony, Scene II, William Shakespeare.
The truth of the USS San Francisco accident would have changed the course of world history, I was told. The fall of the Bush-Cheney administration before the commencement of their 2nd term, could have stopped the “build up” of the many financial bubbles engineered by them. The 2010 BP's mega oil spill was not the first scandalous attempt at flooding the sea with oil for unscrupulous economic agenda. The first attempt was aborted in mid 2008 just before the financial and economic collapse of 2008. World politics and economics are outside the realms of my expertise. No doubt, further exposures will follow this analytical review on the fake USS San Francisco grounding incident and 2004 Quake-tsunami disaster.
Shortly after publication of Part 1 of this article, there was renewed surveillance at my known residences. This coincided with intensified search efforts to locate my whereabouts. The publication of part II will no doubt heighten the risk of life threats to me and my family. This would be a small price to pay for the hundreds of thousands of innocent lives lost and the countless millions who lost their savings, jobs, livelihood and their way of life by such evil disaster schemes.
To keep the article short, the analytic discussions are kept as brief as possible without losing their essence. Details are being compiled into a book.
Continued in Part-II