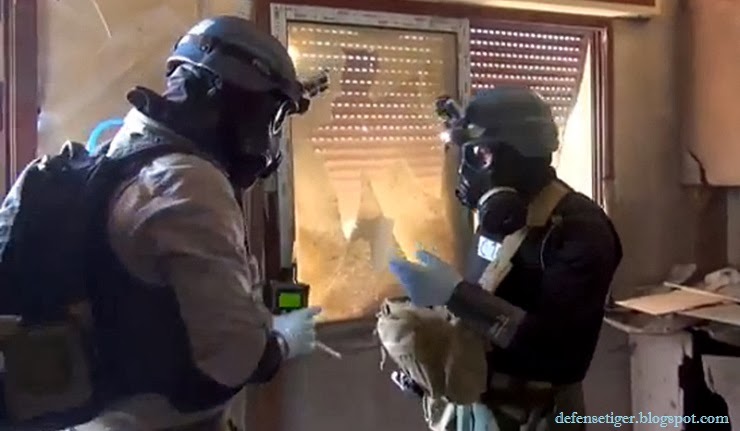 The most dangerous types of toxic substances from Syria's chemical weapons arsenals will be removed from the country by December 31 and destroyed on a vessel provided by the United States, Ahmet Uzumcu, director-general of the Organization for the Prohibition of Chemical Weapons (OPCW) said in a statement.

"The United States has offered to contribute a destruction technology, full operational support and financing to neutralize Syria's priority chemicals, which are to be removed from the country by 31 December," the statement says.

"The neutralization operations will be conducted on a US vessel at sea using hydrolysis," the statement says.

Uzumcu also reiterated that 35 commercial companies have expressed on interest in participating in the destruction of Syrian chemical weapons. These offers will now undergo evaluation, he said.

The US government has begun outfitting a ship in its reserve ready force with equipment to enable it to destroy some of Syria's chemical weapons at sea in the event Washington is asked to assist in the effort, a defense official said on Sunday.

The Maritime Administration vessel MV Cape Ray is being equipped with the newly developed Field Deployable Hydrolysis System, which was designed by the Defense Department to neutralize components used in chemical weapons, a defense official said on condition of anonymity.

The Organization for the Prohibition of Chemical Weapons, which supervising the disposal of Syria's chemical arms, said last week the United States had offered to destroy some of the components on a US ship and was looking for a Mediterranean port where the work could be carried out.

"The United States is committed to supporting the international community's efforts to destroy Syria's chemical weapons in the safest, most efficient and effective means possible," Caitlin Hayden, a spokeswoman for the White House National Security Council, said in an email on Sunday.

"We have offered and are currently outfitting a US vessel with field deployable hydrolysis system technology to support the OPCW's efforts," she said, adding the US remained "confident that we can meet the milestones for destruction set out by the OPCW."

The OPCW aims to remove the most critical chemicals out of Syria by the end of December, with the remainder due out by Feb. 5.

The Cape Ray, a 648-foot (198-meter) vessel with built-in ramps to enable cargo to be efficiently rolled on and rolled off, is part of the Maritime Administration's ready reserve force of 46 ships.

The force was organized to provide strategic sealift for US military forces, but it is part of the Transportation Department. The Pentagon would lease the Cape Ray if it participates in the Syrian chemical weapons destruction, the defense official said.

The OPCW said last week 35 firms had expressed an interest in bidding for commercial contracts to dispose of some 800 tonnes (1 tonne = 1.102 metric tons) of bulk industrial chemicals that are safe to destroy in commercial incinerators.

Another 500 tonnes of chemicals, including nerve agents, were seen as too dangerous to import into a country or to process commercially. The OPCW was considering the US offer to neutralize those chemical agents on a vessel at sea.

The United States has offered to destroy Syria's priority chemicals on a US vessel at sea using hydrolysis, adding that a naval vessel was undergoing modifications to support the operation, the Organisation for the Prohibition of Chemical Weapons (OPCW) said.

The OPCW also said it had received expressions of interest from 35 firms for the safe disposal of Syria's chemical stockpile.

"The United States has offered to contribute destruction technology, full operational support and financing to neutralise Syria's priority chemicals," the organisation said in a statement.

The United States has offered to destroy Syria's chemical stockpile and plns to do so at sea, the world's chemical watchdog said on Saturday.

"The Director-General stated that the neutralisation operation will be conducted on a US vessel at sea using hydrolysis," the Hague-based Organisation for the Prohibition of Chemical Weapons said in a statement.

The Obama administration is offering to destroy some of Syria’s chemical weapons in international waters on one of its ships, Itar-Tass reports.

The destruction would likely be on the MV Cape Ray, a US government-owned ship, in the Mediterranean Sea, with US Navy warships patrolling nearby. The US would use what it calls a mobile Field Deployable Hydrolysis System to neutralize the chemical material, making it unusable in weapons.

This approach would avoid the vexing diplomatic, environmental and security problems posed by disposing of the materials on any nation’s soil. The plan still needs final approval by the UN chemical watchdog, the OPCW.

Jonathan Lalley, a spokesman for the president's National Security Council, stressed that no decisions had been made regarding destroying chemicals outside of Syria.

"We and our international partners are pursuing alternative means of destruction, and we will continue discussing with other countries how they might best contribute to that effort," Lalley said in a statement.

"We remain confident that we will complete elimination of the program within the milestones agreed upon."
Posted by Unknown at 4:04:00 PM