Ten personnel of the Indian Border Security Force (BSF) were killed as a small plane crashed near the Delhi airport on Tuesday morning, soon after take-off, Indian media reported. All on board, including three BSF officers and seven technicians were killed. The plane, a Super King aircraft, was flying to Ranchi. Reports suggest it was trying to return after a technical snag was noticed five minutes after take-off. 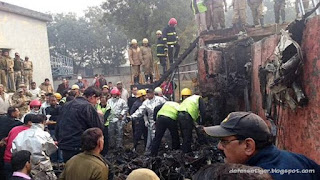 The crash took place at around 9.50 am, moments after technicians lost contact with ground control. The plane hit a wall and landed in a sewage treatment plant. The aircraft burst into flames and was almost completely wrecked. A part of it was submerged.

Union Minister of State for Civil Aviation Mahesh Sharma has said that an investigation has been ordered. Talks in Dhaka between the BSF and its Bangladesh counterpart have been put off because of the crash. These aircraft are often used by top officials and ministers. The plane that crashed had senior technicians who were flying to Ranchi to repair a helicopter.
Posted by Unknown at 4:51:00 PM