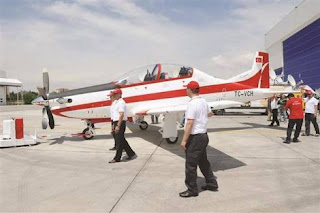 The planned screeners will replace an aging fleet of SF 260 primary trainers assembled in the early 1990s under Italian license by Turkish Aerospace Industries (TAI).

Industry sources say the contract could be worth between $50 million and $75 million.

Military officials say that by 2017 the Turkish trainer fleet will comprise the screeners Ankara intends to buy, KT-1 trainers supplied by Korean Aerospace Industries under a 2007 contract, the Hurkus, the upgraded T-38s (T-38Ts) and the F-16s. By 2025, the fleet will have the screeners, the Hurkus, an indigenous trainer to be designed and developed for the fighter jet Turkey intends to build, the TF-X and a combination of the F-16s, TF-Xs and the F-35s.
Posted by Unknown at 2:08:00 PM