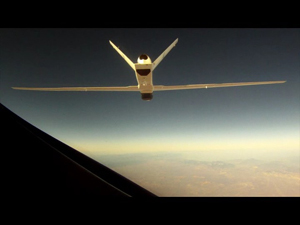 Northrop Grumman’s Proteus test aircraft (Proteus is a tandem-wing high-endurance aircraft designed by Burt Rutan to investigate the use of aircraft as high altitude telecommunications relays), and a NASA Global Hawk (Global Hawk [known as Tier II+ during development] is an Unmanned Aerial Vehicle (UAV) used by the United States Air Force and Navy as a surveillance aircraft.) have set a new industry record by flying as close as 40 feet apart at an altitude of 45,000 feet.(NB:The Proteus is actually a multi-mission vehicle, able to carry various payloads on a ventral pylon. An extremely efficient design,the Proteus can orbit a point at over 65,000 feet (19,800 m) for more than 18 hours. It is currently owned by Northrop Grumman.

The basic purpose of the test was that high altitude environment was required for refueling of high altitude long endurance as it is the unmanned aircraft system of USA. Along with that they also examined the performance and flight control responsiveness of the Aircraft. As a result of the test is that the Global Hawks are able to do the autonomous aerial refueling. This test has brought forth the spring of 2012 in the world. 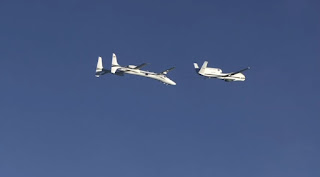 While speaking at at Northrop Grumman Aerospace Systems sector, Geoffery Sommer said,”Demonstrating close formation flight of two high altitude aircraft, whether manned or unmanned, is a notable accomplishment,” further he said, “When you add autonomous flight of both aircraft into the mix, as we will do later in the KQ-X program, you gain a capability that has mission applications far beyond just aerial refueling.” (NB:KQ-X is a $33 million DARPA program awarded to Northrop Grumman Corporation on July 1, 2010. KQ-X will investigate and develop Autonomous Aerial Refueling techniques using two NASA Global Hawk high altitude long endurance [HALE] unmanned aerial vehicles [UAV]). The $33 million DARPA KQ-X program will demonstrate autonomous fuel transfer between two Global Hawks, enabling flights of up to one week endurance.

Actually KQ-X is a follow-on to a 2006 DARPA Autonomous Aerial Refueling Demonstration (AARD).It is an effort made along with NASA Dryden, which used an F-18 fighter jet as a surrogate unmanned aircraft to autonomously refuel through a probe and drogue from 707 tanker. Frame Representation Language(FRL), realized that their looped-hose system left a lot to be desired and began work on an improved system that is now commonly called the probe-and-drogue air-to-air refueling system and today is one of the two systems chosen by air forces for air-to-air refueling, the other being the flying-boom system.Modern specialized tanker aircraft have equipment specially designed for the task of offloading fuel to the receiver aircraft, based on drogue and probe, even at the higher speeds modern jet aircraft typically need to remain airborne. And finally Northrop Grumman supports the operation of the two Global Hawks used in the KQ-X program under the terms of a Space Act Agreement with its NASA Dryden partner and is responsible for all engineering design, as well as modification of both aircraft.
Posted by Unknown at 4:54:00 PM