Just like Toyota is developing technology to face the challenges of finding renewable energy sources with its Prius, the aerospace industry is making its own efforts. These efforts are now no more limited to deliver a greener aviation industry in terms of passenger airliner. On 18th March 2011, an F-22 Raptor successfully flew at supercruise on a 50/50 fuel blend of conventional petroleum-based JP-8 and biofuel derived from camelina, a weed-like plant not used for food. 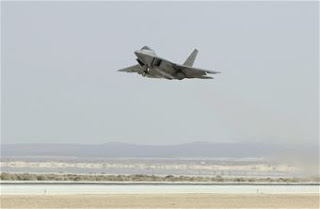 Ultimately the U.S Air Force selected theF-22 weapons system to be the biofuel blend flight test pathfinder for all fighter aircrafts and the flight was the capstone of a series of ground and flight test events conducted by the 411th Flight Test Squadron at Edwards Air Force Base.

The overall test objective on a single-seat, twin-engine fifth-generation super maneuverable fighter aircraft was to evaluate biofuel fuel blend suitability in the F-22 weapons system and testing consisted of air starts, operability, and performance at different speeds and altitudes throughout the flight envelope. It also performed several maneuvers including a supercruise at 40,000 ft., reaching speeds of 1.5 Mach.

In terms of economic benefits to reduce aviation fuel cost the overall flight was a success and another milestone was completed for the Alternative Fuels Certification Division. In support to the United States’ Air Force’s 2016 acquisition goal to cost-competitively which acquire 50 percent of the domestic aviation fuel requirement via alternative fuel blends in which the component is derived from domestic sources and produced in a manner that is ‘greener’ than fuels produced from conventional petroleum.

Studies have shown camelina-based jet fuel to reduce carbon emissions from jets by about 80%. The camelina-derived synthetic fuel falls into a class of hydroprocessed blended biofuels known as hydrotreated renewable jet fuels, or HRJs. The HRJ fuel can be derived from a variety of plant oil and animal fat feedstocks. Previously the United States Navy chose camelina as the feedstock for their first test of aviation biofuel, and successfully operated a static General Electric F414 engine, which is the engine for the Boeing F/A-18.

In February Air Force officials certified the entire C-17 Globemaster III fleet for unrestricted flight operations using the HRJ biofuel blend. We are still to see whether the U.S Air Force will implement bio-fuels in their fifth generation fighters.
Posted by Unknown at 5:20:00 PM