An Australian military surveillance plane flew near disputed areas of the South China Sea, emerging Wednesday after the crew warned China's navy it was on a freedom of navigation mission. 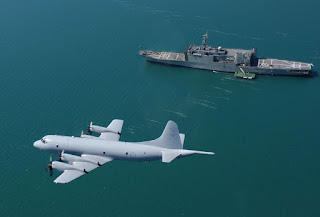 Tensions in the region have mounted since China transformed reefs in the South China Sea into small islands capable of supporting military facilities, a move the United States says threatens free passage in an area through which one-third of the world's oil passes.

In October, Washington infuriated Beijing when the USS Lassen guided missile destroyer sailed within 12 nautical miles of at least one land formation claimed by China in the disputed Spratly Islands chain.

Now a Royal Australian Air Force patrol plane has carried out patrols in air space around the area.

"A Royal Australian Air Force AP-3C Orion was conducting a routine maritime patrol in the region as part of Operation Gateway from Nov. 25 to Dec. 4," a defence department spokesperson told AFP.

"Under Operation Gateway, the Australian Defence Force conducts routine maritime surveillance patrols in the North Indian Ocean and South China Sea as a part of Australia's enduring contribution to the preservation of regional security and stability in Southeast Asia."

The comments follow audio released by the BBC late Tuesday after a reporting assignment in the Spratly archipelago.

In the scratchy radio recording, an RAAF pilot is heard speaking to the Chinese navy.

"We are an Australian aircraft exercising international freedom of navigation rights in international airspace in accordance with the international civil aviation convention and the United Nations Convention on the Law of the Sea — over."

The BBC said it recorded the audio from a RAAF AP-3C Orion aircraft on Nov. 25. It said the message was repeated several times but no response was heard from the Chinese.

The Australian newspaper said it understood that the aircraft did not fly within the 12-nautical-mile limit China claims around the artificial islands it has built up.

The BBC hired a small plane and took off from the Philippines, which also claims some of the scattered atolls and reefs in the region, to film Chinese claimed land and construction and to see whether they were challenged.

It said they were warned several times, with radio communication from the Chinese navy telling them "you are threatening the security of our station."

China insists on sovereignty over virtually all the resource-endowed South China Sea, but Washington has repeatedly said it does not recognize the claims.

In a communique after talks in Sydney in November, US allies Japan and Australia called on "all claimants to halt large-scale land reclamation, construction, and use for military purposes" in the South China Sea.
Posted by Unknown at 7:30:00 PM