Troops from India and China will for the first time meet in a joint military exercise on the heavily manned, disputed border that has been the reason for several armed face-offs and a major war between the two neighbours. In a move aimed at building confidence among soldiers from both sides that patrol the Line of Actual Control (LAC), local garrisons will take part in a tactical exercise that would be focused on cooperation in disaster management. While the scope of the exercise is limited, this is the first time that troops which frequently track each other on patrols along the disputed border and even physically block attempts of transgression will meet for a military drill. 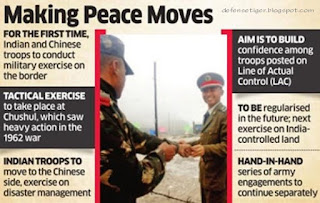 Senior army officials told ET that the joint exercise is expected to begin within a few weeks and the first of the series will take place on the Chinese-controlled side of LAC. Such tactical exercises are expected to become a regular feature with the next one taking place on the Indian side of LAC. The location for the first such exercise is also steeped in the disputed history of the border with Chushul being chosen for the engagement.The Chushul area saw some of the fiercest engagements of the 1962 border war and was one of the few places where Indian troops managed to thwart the Chinese push. 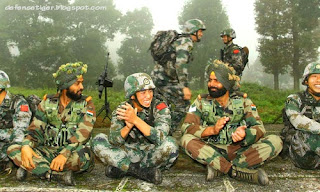 "The first engagement will be on disaster relief and is aimed at building confidence. Local commanders will exchange notes and the first exercise will be followed by one on the Indian side. The modalities and the date for the exercise are being finalised," a senior official told ET. Besides a small number of troops on the ground, the engagement would consist of a table-top exercise in which commanders from both sides would jointly plan operations.
Posted by Unknown at 3:16:00 PM