The future of MV-22B Osprey technology may be fast arriving. In late March, the Marine Corps teamed with the Defense Advanced Research Projects Agency to test-fire a precision-guided missile from an airborne Osprey. In a unique twist, the air crew coordinated the shoot with ground troops operating handheld tablet technology. The PCAS, short for persistent close air support system, was featured at Talon Reach, a regular exercise conducted in the southwestern U.S. 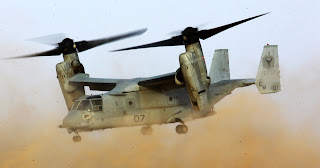 During the demonstration, a joint terminal attack controller used the mapping software on his tablet to identify a target near an unmanned truck and then communicate its position to a PCAS module inside the Osprey, DARPA officials explained in a recent news release. Troops in the air and on the ground then confirmed the shot before the Osprey fired.

The munition was a nonexplosive version of the tube-launched AGM-176 Griffin missile. It traveled about 4.5 miles. "The length of time from initiation by the JTAC to missile impact on target was just over four minutes — even better than PCAS' goal of six minutes, and more than seven times faster than the half hour or more it can take using current methods that rely on voice directions and paper maps," DARPA's news release states.

Officials are touting this enhanced communication and accuracy as another major leap forward for the Osprey and the Marines' ability to quickly plan and execute missions. Lt. Gen. John Davis, the service's deputy commandant for aviation, referenced the demonstration during a discussion in mid-April at the Sea-Air-Space conference in National Harbor, Maryland. Using tablets to link Marines on the ground with those inside an aircraft is becoming almost commonplace among those who've trained with such technology, he said. 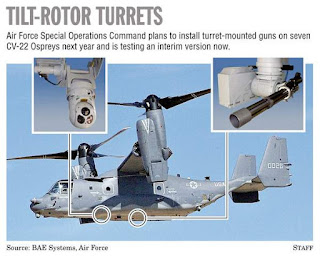 "Bottom line," Davis said, "they're acting like this is standard gear." He called the PCAS test a positive byproduct of the service's otherwise challenging fiscal constraints. When money is tight, leaders are forced to find new and creative ways to do more with the gear available to them, Davis said, adding it "leads to better thinking."

The general also hopes to see the service maximize resources by developing a mid-air refueling capability for the Osprey. With it, these passenger and cargo transports would double as aerial tankers, a function performed now by the Marine Corps' fleet of KC-130J Hercules. This would enable them to regularly fly about 2,000 miles, he said.

These ideas are among several concepts outlined in the Marine Corps' 10-year aviation plan, released last fall. The recent testing reveals how determined officials are to make those concepts reality.

Davis said the work will enable Marines to stay ahead of enemy capabilities and to be prepared for a variety of operations while facing evolving threats around the world. "Be ready for the high-end fight; it's coming our way," he added. "Any fight, any time."
Posted by Unknown at 1:39:00 PM