Korea Aerospace Industries (KAI) has revealed the prototype that will form the basis of Lockheed Martin’s bid for the US Air Force’s T-X next generation trainer competition.

Based on the T-50 family of trainer/light fighter aircraft, the company’s “T-X demonstrator aircraft” will conduct ground and flight tests in 2016, says KAI in an email to Flightglobal. In 2017, KAI plans flight tests in the USA. 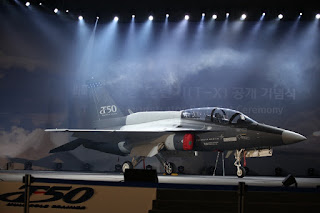 Aesthetically, the most striking change from the original T-50 is the addition of a large dorsal hump.

The original T-50, along with its variants, was developed via technology transfer from Lockheed Martin with offsets related to South Korea’s large F-16 fleet.

The lucrative T-X competition has always been a major objective of the T-50 programme, which is a source of great national pride in South Korea. The country's president Park Geun-hye was in attendance at the rollout ceremony.

The winner of the T-X competition will eventually replace the 55-year old Northrop T-38 Talon, which has served as the USAF’s advanced jet trainer since the 1960s. The procurement could reach up to 350 units. 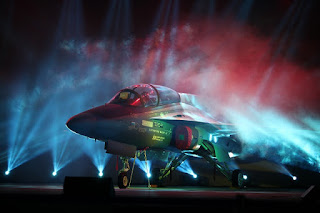 The appearance of the Lockheed/KAI T-X technology demonstrator is notable in that it makes the Lockheed/KAI team the first competitor to show its hand. Over the years KAI and Lockheed have displayed models at air shows of a baseline T-50 with T-X markings.

The other T-X competitors are Northrop Grumman, Boeing (which is teaming with Saab) and Alenia Aermacchi.

On 12 December, Northrop Grumman grudgingly allowed journalists to a view of a model of its planned offering for the requirement, but allowed no photographs. Days later in an interview with Flightglobal, Boeing Phantom Works president Darryl Davis refused to provide any more details about the US firm’s planned clean-sheet offering with Saab.
Posted by Unknown at 2:45:00 AM