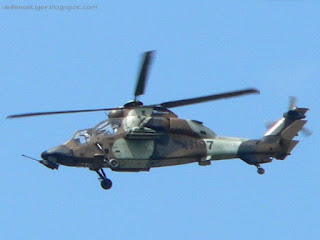 A DGA spokesman declined to give the value of the order, which was announced in May as part of the revised 2014-19 military budget law. The seven helicopters will be delivered between 2017-18. The Tigers will be the attack version, or hélicoptère appui-destruction (HAD), which are equipped with a more powerful engine, improved targeting system, additional combat external fuel tanks, and certified for Hellfire and Spike air-to-ground missiles in addition to the Mistral air-to-air weapon.

The latest order brings the French fleet to 67 Tigers and follows a request last year from the French Army to send a mixed batch of some 10 attack and transport helicopters to boost the present deployment of helicopters supporting troops in the Barkhane anti-insurgency operation in the Sahel. In 2012 prices, the French share of the Tiger program was €6.3 billion (US $6.9 billion), based on 80 units ordered separately by France and Germany, and 22 by Spain, a French Senate report on the draft 2013 defense budget said. The unit cost, excluding development, was then €27 million for the escort, and €35.6 million for the attack version.

France previously cut the Tiger order to 60 from 80 units for budgetary reasons, then this year added the seven in response to the request from the ground forces. The defense ministry has also pledged to speed up delivery of six NH90 transport helicopters, also seen as needed to support the 3,500 troops spread across five African countries partnered in the Barkhane mission. France has ordered a retrofit of the 36 escort models to bring the full Tiger fleet to the more capable attack version.
Posted by Unknown at 3:20:00 PM