China has added another of its most advanced destroyers to the South Sea fleet, according to China Military Online.The guided missile destroyer Hefei (hull number 174), the third in the Type 052D class (also known as the Luyang-III class), was commissioned in a ceremony on Sunday at the naval port at Sanya, in China’s Hainan province. 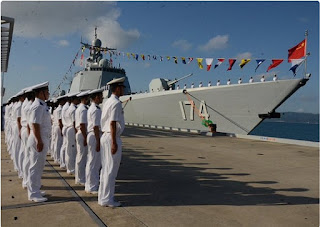 As The Diplomat repeated previously, the first two Type 052Ds were commissioned in March 2014 (the Kunming) and August 2015 (the Changsha). Like the Hefei, those two ships were also deployed as part of China’s South Sea fleet, which operates in the South China Sea, where China has maritime disputes with Brunei, Malaysia, the Philippines, and Vietnam.

Vice Admiral Wang Dengping, the deputy political commissar of the People’s Liberation Army Navy (PLAN) attended the naming ceremony for the Hefei on Sunday. China Military Onlineparaphrased Wang as saying that “as the most advanced guided missile destroyer independently designed and built by China, the destroyer Hefei will play an important role in further enhancing the systematic combat capability of the PLA Navy and maintaining China’s maritime rights and interests.”

China Daily expanded on that, saying that the three new “world-class guided missile destroyers” were “extensively improving the country’s maritime combat capacity.” The Hefei’s captain, Commander Zhao Yanquan, told China Daily, “Compared with the Wuhan, a Type 052B ship on which I was deputy captain, the new ship is especially stronger in terms of target detection capacity and air defense capability.”

According to a report on the PLAN from the Pentagon’s Office of Naval Intelligence, the Type 052D “embodies the trend [in China] toward a more flexible force with advanced air defenses and long-range strike capability.” The entire Type 052 series (including the Type 052B and C as well) is “considered to be modern and capable designs that are comparable in many respects to the most modern Western warships.”

ONI reports that the Type 052Ds are equipped with a long-range variant of the HQ-9 surface-to-air missile (with a range of 80 nautical miles as opposed to the standard 55 nm). The class also boasts vertically-launched YJ-18 anti-ship cruise missiles, which pose a potential threat to U.S. aircraft carriers. Andrew Erickson, a noted expert on the PLAN based at the U.S. Naval War College, described the YJ-18 as a “a potent new-generation supersonic anti-ship cruise missile (ASCM) that could pose unprecedented challenges to the air defenses of U.S. and allied ships.”

The PLAN has plans to add an additional nine Type 052Ds, for a total of 12. Construction has been completed on seven.
Posted by Unknown at 5:17:00 PM