Germany Going to Put on Steps in Syrian Soil

Germany is planning to deploy 1,200 troops to help France in the fight against Islamic State jihadists in Syria, its army chief said Sunday, in what would be the military's biggest deployment abroad. 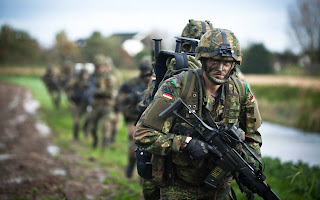 "From a military point of view, around 1,200 soldiers would be necessary to run the planes and ship," army chief of staff Gen. Volker Wieker told Bild am Sonntag newspaper, adding that the mission would begin "very quickly once a mandate is obtained."

"The government is seeking a mandate this year," said Wieker.

Berlin on Thursday offered France Tornado reconnaissance jets, a naval frigate, aerial refueling and satellite images in the fight against the IS group.

Between four and six Tornados would be deployed to deliver images of the ground, even in poor weather and during the night, Wieker said.

Asked why Germany had shied away from participating in direct air strikes, Wieker said the coalition already had "sufficient forces and means" dealing with that aspect of the battle.

"What is needed is reconnaissance on the ground, so that these forces can be deployed effectively. Our Tornados can contribute a lot in that area," he said.

Talks are ongoing with Turkey and Jordan on stationing the planes in Incirlik — which also serves as a base for US jets, as well as in Amman.

Wieker swiped aside any criticism that Germany had opted for "the least dangerous" tasks, saying: "This allegation is not justified. What is the difference when you fly a bomber jet or a reconnaissance plane over the same area? The levels of threat and danger are the same."

Post-war Germany has been traditionally reluctant to send troops abroad, although it has joined UN-mandated missions in the Balkans and elsewhere, and the NATO coalition in Afghanistan.

Germany has not taken part in air strikes against the IS in Syria and Iraq, which have been mainly flown by US and French aircraft.

After France last week invoked a clause requiring EU member states to provide military assistance after the Paris attacks, Germany swiftly announced its participation in the fight in Syria.
Posted by Unknown at 3:34:00 AM