Turkey has shot down a Russian military jet which it says violated its airspace near the Syrian border.

A military official, quoted by Turkey's Dogan news agency, said the plane was shot down by Turkish F16s, and that the pilots were given repeated prior warning.

Video posted by the Haberturk TV station appeared to show the jet coming down in flames, while separate footage showed two pilots parachuting to safety within hostile Syrian territory. Their fate remains unknown.

In a statement, the Russian defence ministry confirmed the jet was one of its SU-24 bombers.

But it denied Turkey's claims that the plane violated its air space, saying Moscow has proof the jet was over Syria "at all times".

And a Russian military official also denied Turkey's claims it brought the plane down with two F16s on regular border patrols - saying it believed the bomber was shot down by artillery fire from the ground.

Turkish President Tayyip Erdogan was briefed by the head of the military, while Prime Minister Ahmet Davutoglu ordered consultations with NATO, the United Nations and related countries, their respective offices said.

Nato's headquarters in Brussels, already in a tense state of lockdown following the terror threat there, said it would be issuing a statement later on Tuesday.

Rami Abdurrahman, who heads the Britain-based Syrian Observatory for Human Rights, said the warplane crashed in the Turkomen Mountains region in the coastal province of Latakia.

Various reports described the plane as coming down in hostile Syrian territory, and broadcaster CNN Turk cited local sources saying one of the pilots was in the hands of Turkmen forces who were searching for the other.

CNN Turk published images purporting to show two pilots parachuting safely to the ground, and reported that two helicopters had been sent from Turkey to try and retrieve them.

The Russian military has sent its own helicopters to search for the pilots on the ground, according to the Dogan news agency. 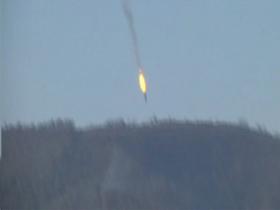