The US Department of State has approved a potential sale of three Northrop Grumman RQ-4 Global Hawk unmanned surveillance systems to Japan.

The Defense Security Cooperation Agency notified Congress of the possible foreign military sale on Nov. 19, according to a DSCA statement. 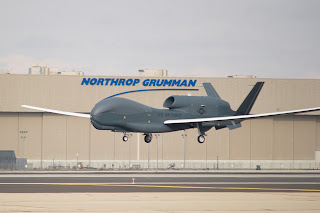 The deal for three Block 30 Global Hawk remotely piloted aircraft, including three Enhanced Integrated Sensor Suites and 16 navigation systems, is worth up to US $1.2 billion.

Japan has been focused on building up its surveillance assets in the region as neighboring China has become increasingly aggressive. Japan's Ministry of Defense officially decided to procure the Global Hawk, as well as Boeing's V-22 Osprey and Northrop's E-2D Hawkeye command and control aircraft, in 2014.

Japan chose the Global Hawk over the Guardian ER design by General Atomics for the country's Air Self Defense Force.

"The proposed sale of the RQ-4 will significantly enhance Japan's intelligence, surveillance, and reconnaissance (ISR) capabilities and help ensure that Japan is able to continue to monitor and deter regional threats," according to the statement. "The Japan Air Self Defense Force (JASDF) will have no difficulty absorbing these systems into its armed forces."

In the statement, DSCA touted the sale as strengthening the US-Japanese alliance at a time of growing tensions over China's moves in the South China Sea.

"This proposed sale will contribute to the foreign policy and national security of the United States," the statement reads. "Japan is one of the major political and economic powers in East Asia and the Western Pacific and a key partner of the United States in ensuring regional peace and stability."
Posted by Unknown at 11:57:00 AM