Navy and Air Force developers are immersed in early conceptual work on a new, sixth-generation fighter aircraft designed with breakthrough technologies and an ability to perform for both manned and unmanned missions. 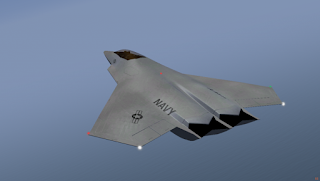 Few details are available about the new aircraft, called F/A-XX by the Navy, because the early work is at this point purely conceptual, said Rear Adm. Michael Manazir, Director of Air Warfare.

"There is an opportunity to field an unmanned system in the F/A XX program. We are collaborating with the Air Force on the technologies that would be required to operate an air system that gives us enhanced capabilities in the future," Manazir told reporters June 15.

Air Force senior leaders tell Military.com they are working closely with the Navy on future technologies but do not yet have a platform identified.

"We are actively engaged with the Navy on the capabilities required to achieve air superiority to 2030 and beyond. As always, we’ll need the capability to sense and characterize the battlespace, then command and control platforms and weapons, all while surviving. As of right now, that does not translate to a next-gen fighter," Maj. Gen. Paul Johnson, Deputy Chief of Staff, Requirements, Air Force said in a statement.

The new aircraft will, at least in part, replace the existing inventory ofF/A-18 Super Hornets which will start to retire by 2035, Manazir said.

The Navy vision for a future carrier air wing in 2040 and beyond is comprised of the carrier-launched variant of the Joint Strike Fighter, the F-35C, as the legacy aircraft alongside the EA-18G Growler electronic jamming aircraft and the yet-to-be built Unmanned Carrier Launched Airborne Surveillance and Strike platform, or UCLASS, a carrier-launched drone slated to arrive by 2025.

Also, around this time is when Navy planners envision its F/A-XX aircraft to be ready, an aircraft which will likely be engineered for both manned and unmanned missions.

"Technologies are rapidly advancing in coatings, electromagnetic spectrum issues, maneuvering, superiority in sensing the battlespace, communications and data links. We are looking at the way in which you integrate these into platforms into the future. Lots of things are starting to come to the fore, but it is as amorphous as it sounds," Manazir added.

Manazir also added that the Navy is likely to develop new carrier-launched unmanned air vehicles other than UCLASS in coming years as well.

Analysts have speculated that as Navy F/A-XX developers seek to engineer a sixth-generation aircraft, they will likely explore a range of next-generation technologies such as maximum sensor connectivity, super cruise ability and an aircraft with electronically configured "smart skins."

Maximum connectivity would mean massively increased communications and sensor technology such as having an ability to achieve real-time connectivity with satellites, other aircraft and anything that could provide relevant battlefield information, said Richard Aboulafia, vice-president of analysis at the Teal Group, a Va.-based consultancy.

The new aircraft might also seek to develop the ability to fire hypersonic weapons, however such a development would hinge upon successful progress with yet-to-be-proven technologies such as scramjets, Aboulafia added.

Super cruise technology would enable the new fighter jet to cruise at supersonic speeds without needing afterburner, he explained.

Smart aircraft skins would involve dispersing certain technologies or sensors across the fuselage and further integrating them into the aircraft itself, Aboulafia said.

"Smart skins with distributed electronics means that instead of having systems mounted on the aircraft, you would have apertures integrated on the skin of the aircraft," he said.

This could reduce drag, increase speed and maneuverability while increasing the technological ability of the sensors.