Prototype No. 2017: Its May Be The Production Model Prototype of The J-20 Mighty Dragon

Just after three months from the 7th prototype of the J-20 Mighty Dragon its the 8th prototype of this 5th Gen. fighter rolled out. Its not that much wonder that engineers, scientists & technicians in the Chengdu are doing very much well to be ahead of their projected timeline for J-20's production model freezing target date. They did it regarding some previous prototypes, built prototypes faster & stunned technological world.

Till the date, Chengdu builds 8 prototypes of this stealth fighter. It was speculative in some of those previous prototypes that they're doing major-minor changes and correctional design works. And none of them were graced with festive mode, which, J-20 prototype no. 2017 embraced. Some other forward fuselage features redesigned with extreme care and looks like Chengdu gonna freeze the final design for Low Rate Initial Production (LRIP). Its a little bit tough to assume the final design because the brains are working inside there in Chengdu frequently changed design features of the Mighty Dragon. But, due to some simple but thoughtful clues, now it seems that the final LRIP design for J-20 gonna freeze.

Why? Because it was never seen that none of those previous prototypes were being celebrated except first prototype. And, the number "eight", its literally enough for any advanced fighter to be build un their development phases.

Firstly, In the picture it is speculative that women are hailing the prototype no. 2017 with flowers and people are likely in joyous mode, seeing the Dragon. Its might hints that it is the last prototype and this model finalized for production. There in China its the tradition to celebrate something important to start with in festive occasions.

Secondly, to develop any fighter aircraft its conventionally enough to build five-ten prototypes if there not any teething problem causing severe delay in development. Hence no sign of development problem of J-20 has been seen yet, it is likely that development of this fighter were & still smooth enough except powerful engine. The development of airframe and other sub-systems were smooth and tests being conducted simultaneously on an An-204 & Y-8 platform to reduce development time and advance the development process. First two, 2001 & 2002, was mainly demonstrators. Prototype no. 2011, 2012, 2013, 2015, 2016 & 2017 are intended for heavy trials and experiments for all aspects. Regarding stealth performances developers shuffles their designs with extreme catholicism. Rear fuselage, engine exhaust covering, forward fuselage, forward canard, radome and wing design was reshuffled several times to refine the final airframe design.

Due to this speculations and from experts views it can be concluded that world gonna see soon the LRIP small batch of J-20 Mighty Dragon ruling over the Asian skies; though, the intended engine for J-20 is still not ready.

Here this is the forward fuselage comparisons between prototype no. 2011 & prototype no. 2017 (the last one). It shows the differences between two models' radome shape for AESA, DSI bump in the mouth of intakes, raised canopy tinted with gold gloss and some other minor redesigning on the intakes' outer surface etc. 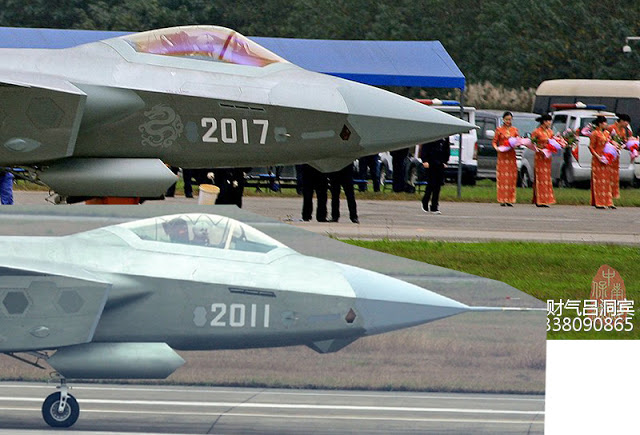